Friends are the family you choose, just as family should be the group of friends you are born with. Having just discussed families last week, it is only fitting that we look at friends again this week. This time, however, we’re not looking at pairs, but entire groups. And, unlike families in anime, there are a huge number of friend groups to choose from.

I did limit myself to friend groups that weren’t official organizations, as that is a topic for another day, though I allow them to be in some organized form and even referred to that way by others.

I also didn’t want them to be… unbalanced. These aren’t “the main hero and everyone else.” And they aren’t “adults and the kids with them,” or vice versa. These are friends, and they are equals.

So, in no particular order: 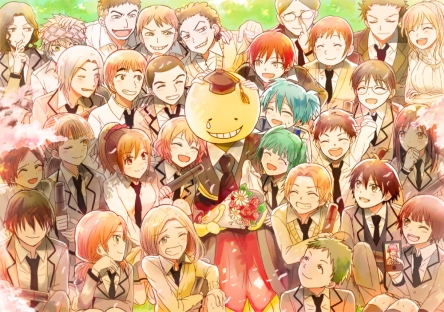 I just love the heck out of these kids! They’re great! 🙂

These kids are the outcasts and misfits, the ones who don’t conform or measure in some way. They got into a most prestigious school, and then they were mistreated by it, as the school environment is shaped entirely by a principal who is grossly misguided in his ideals. They’ve not had much kindness thrown their way, but that just means they’re tougher than they look, and quite capable.

They’re especially a force to be reckoned with when they work together, all of their strengths and weaknesses complementing each other, flowing together into a formidable power that can overcome quite nearly anything in their way. And what a unique education they get!

But as for being friends… well, that’s what I love most about them. They’re all so different, yet kindred spirits. They work together so fluidly, they build each other up and watch each others’ backs, and when they have disputes, they resolve them in a way which satisfies everyone. These kids, they are fellow students, but their shared experiences make them friends for life. 😀 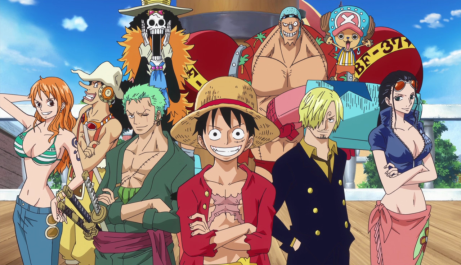 Probably the most  formally recognized group, as an organization, but also the least formal of them all! 😉

Taking their name from their captain, Monkey D. “Straw-Hat” Luffy, the Straw-Hat pirates are an adorable motley of free-spirited misfits united by their mutual loyalty and love for one another, as well as their defiant spirit. Luffy, Zoro, Usopp, Sanji, Nami, Chopper, Robin, Frankie, and Brook (as well as the more recent semi-addition of Jimbei, and their friends and allies) have been through a great deal together. They set out on the seas, each one for his or her own purpose, but they have come together in beautiful harmony. Not “peace.” Harmony.

I can’t help but love all the zany antics of this crew, both in times of tranquil peace and when they’re at war for their lives and freedom. They’re dedication to one another, it doesn’t just magically happen, it grows over time, and when it’s tested, they stand strong. These friends will face any enemy and endure any hardship, even die, for one another. I really love them. 🙂

Tai, Matt, Sora, Izzy, Mimi, Joe, T.K., and Kari. A group of eight “chosen one” children and their digimon partners, facing the challenge of survival, fighting to protect their homes and loved ones, striving to strike down evil before it destroys them all.

These kids may have been thrown together by higher powers, but they overcome all the challenges thrown at them as friends. Matt, who bears the Crest of Friendship, says as much, that it was the feelings they all shared with him which gather close in his heart and make him strong. That is the bond of the Digidestined.

And it holds true beyond any dire scenarios involving the end of the world. The way they get on, there’s friction, of course, but they work through it. They enjoy their time together, they laugh and cry together, and they don’t lose the bond between them, no matter how much time passes. There’s just something inspiring about that, ya know? 🙂

4) Class A
My Hero Academia 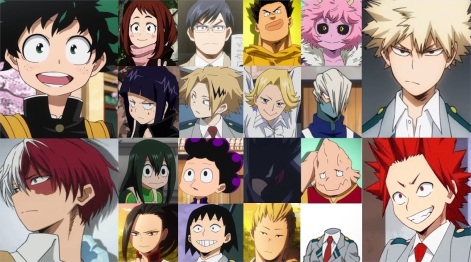 I seem to be hitting kids and classmates rather hard, aren’t I? Oh well!

The bond between the twenty members of Class A is one that goes beyond just being classmates. These kids, from an early age, are deliberately aiming for the same goal: to be heroes. They’re signing up to learn how to help people. They aren’t just in the same class, they’re the rising generation of protectors. And they go through Hell together.

Most inspiring, perhaps, is how they argue and disagree, yet they never hesitate to protect each other. That is their guiding star, the one thing they always hold true to, no matter the circumstance. When they are (frequently) way, way, waaaay out of their depth, they get through it by working together, each one doing whatever they can, however great or small that may be. When they see that any one of them is struggling with something important, they forget their own glory and lay it all on the line for each other. They see the best in each other, and they inspire each other, much like my own friends inspire me. 🙂 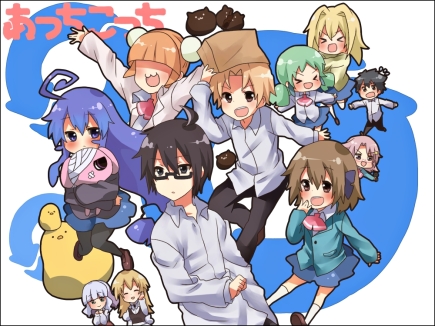 The only ones on this list that don’t have a formal name, heh.

The core group of Io, Tsumiki, Mayoi, Sakaki, and Hime, as well as the additional trio of Saki, Kana, and Kyoya, are quite an entertaining, colorful bunch. Nothing particularly remarkable happens to them, but these high school kids are all peas in a pod.

I think that’s what I like best about them. While all my other picks go through tremendous ordeals, these kids are kindred souls without all of that. They just get on well with each other, have fun together, work together, etc. It’s a simple, realistic friendship, and all the more endearing for it.

So, that’s my five picks! I may have overdone the school kid motif a bit, but there ya go! 😉

Now, tell us, are there any particular groups of friends in anime who tug at your heartstrings? Who would you pick? 🙂

This entry was posted in 30-Day Anime Pick 5 Challenge, Anime and Cartoons, Challenge Accepted and tagged Assassination Classroom, Digimon, My Hero Academia, One Piece, Place to Place. Bookmark the permalink.