5 Anime Clubs, Teams, or Other Organizations

Where last week focused on less-formal groups of friends, this week, we have a bit more “official” organization at work. As in, there is someone in charge, everyone is obligated, as well as expected, to do their part, and there is a specific purpose behind their unity. They don’t even need to be friends, because they are coworkers and official teammates. They literally work together.

That said, I did lean towards people who are friends. It’s just so much more pleasant when they get along, rather than sniping at each other all the time.

So, in no particular order (and I seem to be using that phrase a lot in this particular challenge), I present 5 clubs/teams/organizations from anime. 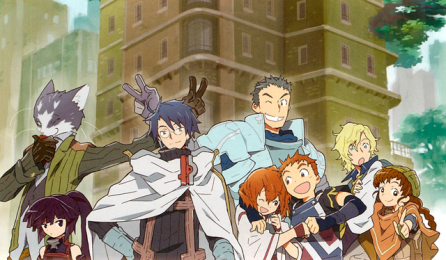 Starting things off, we have a group of friends and comrades who chose to make of themselves an official organization, which is a recurring theme in this list.

When the players of an MMORPG find themselves in the game they were playing, made real somehow, they are very surprised, to put it mildly. It’s a absolute crisis, and for all that they now find themselves nearly immortal, the world is still very dangerous, even for them. Amidst this chaos, it is onlyt natural for friends to find each other and band together, and maybe get a few more friends alongside them. That is exactly what happens, the beginning of a new guild.

Shiroe is just another player trapped in a strange new world. He is gifted in tactics and strategy, but he’s never been much for official guilds. Circumstances change him, however, and he finds that he must take action as things go wrong and his fellow adventurers are turned into victims. He cannot tackle all the problems in front of them alone. So he reaches out to his closest friends first, and slowly the circle widens.

Log Horizon is a guild of friends who share common purpose: they mean to improve the world they are in, safeguard their community, and hopefully find a way to go back home. They are fiercely loyal to one another, and they work very well together. They also refine one another a bit, smoothing out the rough edges and making each other stronger for it. In short, they are fantastic. 🙂

Though I could do without that little love triangle aspect. Oy vey! 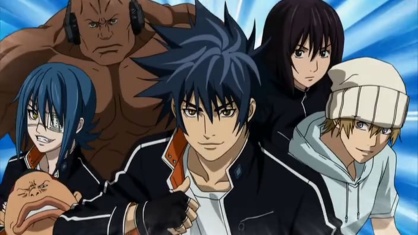 This group is some friends who come together voluntarily, but they’re also a group that goes from being one team to being another. Three out of five of the original members were part of the East Side Guns, if I recall correctly. They were a delinquent school gang that kept their territory and the people within it safe from the predations of other gangs, and that was basically their purpose. When the game changed a bit, and they became outmatched, they changed as well. They gained new tools, new skills, and new blood, thus becoming a new group, but with much the same purpose, called Kogarasumaru.

In the English dub, at least, the meaning of the name is explained as something like, “We are bound to the same fate,” thus representing their unity and strength. And that pretty much sums them up. They’re a pretty motley bunch of freaks, mixing speed, strength, cleverness, and crazy ferocity, but whatever foe or other obstacle they face, they face it together.

They are a most worthy team.

In a world where all the land is ruled by one empire, and has been for centuries, it is inevitable that the rot of corruption would seep into the very heart of it. Injustice and madness reign with unforgiving fists, all the empire’s citizens are helpless, and even a widespread rebellion has little hope of victory. Yet, within the capital, the very seat of imperial power, there is a group of assassins striking down the mighty and the corrupt, paving the way for a rebellion’s ultimate victory. Their name is Night Raid.

The story of Akame ga Kill basically chronicles the battles, losses, and ultimate triumph of this group of assassins, ten of them in total, starting from the perspective on a newcomer. He is recruited during one of their missions, after impressing one of their senior members, and soon he finds that he has joined a very strange, if also very dangerous, family of sorts.

Night Raid is a collection of people who have seen or felt the injustice that is rampant in the empire. This is why they rebel, and though they are indeed a deadly group, they’re enemies are every bit as lethal. Most of Night Raid’s members die throughout the series, leaving their last survivor to carry the weight of all of them alone. But though they have such tragic ends, they are able to be happy together for a time, a little band of brothers and sisters bound by their resolve.

Perhaps that is why I love them. Because though they suffer and die, they also lived. They sacrifice, giving their all, even the memory of them, to save and liberate everyone else, people who will never know them. They had good times, as if they were a true family. And, in the end, they win. 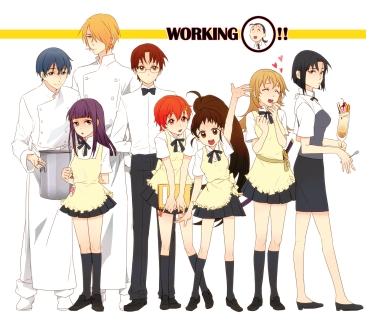 They are, straight-up, a group of coworkers in a small restaurant. They are also a rather unique and eccentric group, an assembly of people who all have issues. But the way they get along and work together is both hilarious and endearing in an odd sort of way.

Amidst the endless jokes on the show, it is the relationships between the employees which really make the show interesting. Most of them are platonic friendships, but there are a couple romantic couplings in the making. And with this many crazy people in the same room, life is never dull! 🙂

…hey, there had to be at least one actual club here! 😉

On its surface, the Host Club of Ouran Academy may seem gaudy and useless, one of those things that only the super rich and privileged could even begin to waste their time and money on, let alone appreciate. It is, after all, a place where the most elite and handsome boys with too much time on their hands entertain young ladies who also have way too much time on their hands. What value could there really be in such a club?

As it happens, the true value is in what it does for its members. Though they generally come from such class and privilege as defies normal, rational comprehension, each of them has been suppressed in some way. Then along came the club’s founder and leader, Tamaki, to open the golden doors of their cages and let them be truly free as themselves. The club is their refuge, their safe haven.

No matter the bright and shiny facade, the very core of the club is one of truly caring for the happiness of others.

So, as ridiculous as it may seem at first glance, I can’t help but like it, just a bit. 😉

And that’s my five picks! 🙂

Knowing that there’s so many other clubs and teams and other organizations out there, what would your picks be?

8 Responses to 5 Anime Clubs, Teams, or Other Organizations