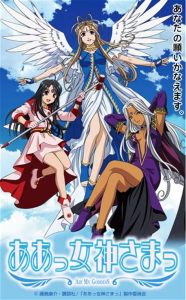 Let it be noted, now and forever, that I do not need thrilling action and massive explosions in all of my entertainment, as proven here. 😉

Ah My Goddess, which should really be “Oh My Goddess,” is a dramatic comedy with a love story between a normal guy and a literal goddess. It follows the hilarious, endearing hijinks of Keiichi and the people around him, most especially three goddesses: Belldandy, Urd, and Skuld. Having pretty much the worst luck in the world, ever, Keiichi was very surprised to have the beautiful Belldandy suddenly appear before him, set on improving his life by granting a wish. So great was his surprise that he didn’t really think about what he was saying when he made his wish, and inadvertently bound her to him for the rest of his life. After that pivotal moment, his life got a whole lot more interesting, but mostly in positive ways, including when her sisters joined up. From there on, the show is just about their lives together, including the developing affections between Belldandy and Keiichi.

Not that these romantic developments are particularly pronounced, most of the time. Super kudos to the show for avoiding either harems or too much in the way of fan service, especially with how easily it could have done either, but, still, they took two full seasons just to get to where Keiichi told Belldandy those three wonderful, magical, most important words! The show bills itself like a romance, and the trailers for at least the second season rather emphasized the coupling, yet they practically left it by the wayside.

I believe the phrasing was something about Keiichi being rewarded with Belldandy’s celestial body, or something like that, which makes it sound much more lewd and focused on the relationship than it actually is.

So, if you want a straight-up love story, this isn’t it.

This is more like the everyday life that comes when you land yourself a literal goddess from Heaven for a girlfriend. There’s her family of fellow goddesses to deal with, with all that this entails, and the attentions of more nefarious powers to be wary of, and that’s in addition the normal people and ordeals that one must automatically contend with anyway. It’s incredibly entertaining, and much more fun than I would have given the show credit for.

Now, it must be said, watching Ah My Goddess was unique for me in at least one way: the dubbing. Evidently, there was some such thing involving the rights and distributing and whatnot so that the first and second seasons got their English dubs from very different people. As it happens, I watched the second season first, with its dub. Then I found the first season and found that I preferred the second season’s voices. It was a little jarring, so I watched it in the original Japanese instead.

So, it’s not the smoothest work, but still highly enjoyable, and I absolutely love both the Japanese and the second season’s English dubbing.

And speaking of what I enjoy, that would make for quite a list!

Of course, there’s all the technical aspects: the animation, the humor, the music, etc. All very well done. But the best part is the people. 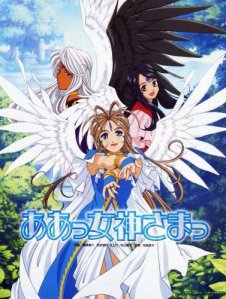 The characters, be they mortal, divine, or infernal in nature, are lovable and endearing. Belldandy is so sweet and magnificent, while Urd is firm in her convictions and highly capable (outside the part where her potions go wrong so often), and Skuld is proud and feisty and brilliant, though not brilliant enough to avoid letting her pride and fighting spirit get her into trouble, heh. Keiichi might be a bit bland and passive, but he clearly cares for those around him. Most of the other characters tend to be driven to the point of obsession about their passions, but they’re generally fun and friendly. Though Marller is a hilarious combination of crazy, wily, and incompetent. And then there’s Hild! She only appears for about the last third of the second season, but she is so strong and cunning and… well, a combination of sexy and scary that defies description. 😉

The plot generally doesn’t advance much, and only then because someone evil does something that the goddesses need to address, so it’s not particularly gripping. But it’s easily to binge this show, because it’s just so fun and funny!

You want to feel generally good about the world? Watch Ah My Goddess!

This entry was posted in Anime and Cartoons, Tuesday Review and tagged Ah My Goddess. Bookmark the permalink.