Godzilla: King of the MonsterVerse

OK, it’s not a perfect movie. But it is a pretty dang epic movie, and a proper launching of the MonsterVerse, the cinematic universe which features Godzilla, King Kong, and such.

I enjoyed the Godzilla movie of 2014, but, let’s be honest, there was tremendous room for improvement. The introduction to its titular monster was far too long and convoluted, the monsters got far too little screen time overall (including just skipping whatever happened after two of them met at an airport), and the humans and their drama were practically irrelevant despite taking up the vast majority of the movie, with a number of unrealistic hoops jumped through along the way.

It would seem that Universal and Legendary learned a few lessons about what we enjoy and what we don’t, and applied them here. The monsters get more screen time, and more fights, without taking forever to introduce any of them. The humans had their part to play, partially in creating the mess that now needs cleaning up, which they also do, and they made stupid mistakes, but they didn’t truly dominate the movie, neither were they entirely irrelevant. There was a balance struck between man and monster, which was also the point of the movie: finding balance between man and nature.

In short, Godzilla: King of the Monsters, is much improved over its predecessor.

I can’t speak for Kong: Skull Island, but I’ve heard fairly good things, so it would seem to me that this particular cineverse is going in the right direction. With Kong vs Godzilla slated for release in about nine months, they’ve certainly laid the groundwork for more to come. And, unlike certain other cineverses I could (and eventually will) name, they are neither rushing things nor leaving us to hang forever. There is nothing definite, as of yet, but there are plenty of possibilities. But I digress. Back to this movie!

What I got from the trailers is that it was partially about man’s relationship with nature, represented by the monsters, and partially about the monsters’ relationships with each other. I was not disappointed in this. The storyline follows the two themes in parallel, often intertwining and influencing each other. It also explores the nuances of humanity within this apocalyptic situation, as some people do terrible things because they believe they must, and some lay it all on the line and sacrifice for their fellows, and some face their demons and sort through their pain, and some fight for nothing more than protecting their loved ones.

Even the monsters, in all their gigantic, terrible glory, have something human to them. The things they did actually resonated with me as a storyteller, as I could see the parts they played as if they were humans too: a warrior king, an angelic queen, a terrifying usurper, and a demonic bad-boy henchman. There were some others in the background, but those were the main players.

In that, the faces and issues of humanity and the surprisingly human-like monsters, super kudos go are due for the writing, directing, special effects, and acting. My particular favorites were Ken Watanabe as Dr. Ishiro Serizawa, Millie Bobby Brown as Madison Russell, and Mothra. Yes, Mothra stole the spotlight a bit, and sometimes was the spotlight. But all the rest still did a fantastic job at being the various players behind the scenes of what the world would see as the ultimate fight between monsters.

Say what you will, this pilot has balls the size of Texas.

The action and tension, ie, the monster fights, were pretty well done, and well constructed. Godzilla and his primary enemy, the three-headed dragon Ghidorah, clashed three times, and it was most enjoyable to watch all three times, with unexpected twists and turns, each fight being a story unto itself.

Not to say that it was all perfect, of course. I did think that they dropped the ball a bit, here and there. When they had humans doing the stupidest thing they could possibly do, for instance. I don’t just mean when the ecoterrorists, with their tired, old, and firmly wrong position about humans causing the end of the world, unleashing what is actually an alien evil bent on destroying the world. I mean when these armed professionals all left a vital piece of technology unguarded. And when the kid ran into a situation and did nothing actually helpful. And when she also ran back to her old home while the city around it was the battleground of godlike monsters. And when all the pilots flew too close to the firebird and died for it. And when the soldiers and scientists thought, “Let’s take the thing that the giant monster is chasing onto a helicopter, and let’s pack it full with our people, including our wounded.”

Basically, as intelligent as they generally were, the people were also profoundly dumb.

I was also a bit confused by the whole light thing they did with Mothra. I’ve seen, very briefly, previous versions of these monsters, and I liked some of the tweaks they made, like making Rodan a more fiery fire-bird. But Mothra’s light show, while beautiful, seemed utterly useless. It contributed nothing whatsoever to the fight, and I was waiting to see what it might do. Would it heat things up, burning all over the dragon’s skin? Would it shed radiation to heal and strengthen Godzilla? Heck, even it did nothing more than blind enemies, it would have been useful. But… no. It just looked pretty for a couple minutes, and that’s it.

It was also pretty obvious that they wanted to set up a lot more to come. The original Godzilla mythos has monsters, yes, but also robots, aliens, and strange, ancient civilizations in unusual, impossible settings. They nod to a number of those, but also refer to locations and monsters we haven’t really seen yet, and there are some we only see in passing.

Even the soundtrack was so beautiful and sweeping that it seemed, if anything, to actually be trying too hard.

Still, I generally had fun watching this movie, and I’m willing to forgive a few missteps here and there. I only care about Mothra’s light thing, for instance, because they actually made me like Mothra. And the human stupidity? I only care about that because I care about the people. The movie draws us in and carries us on an epic of… well, monstrous proportions! (I had to say it) 😉 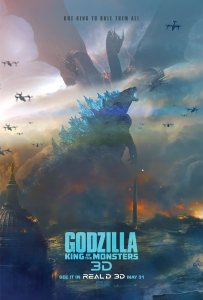 It is not a perfectly-crafted movie, but it is well done and lots of fun. I am rather saddened by the harsh criticism and lackluster box office reception, especially when complaints against it can be leveled far more easily against Avatar and that one had all kinds of success. But, again, I digress.

Godzilla: King of the Monsters is definitely going to be a welcome addition to my personal library!

This entry was posted in Movies, Tuesday Review and tagged Godzilla, Godzilla: King of the Monsters, MonsterVerse. Bookmark the permalink.

2 Responses to Godzilla: King of the MonsterVerse