A Transformers Fan-Theory: The Scheme of the Matrix

As part of helping to raise my nephew, I recently had the chance to re-watch the Transformers-based cartoon Beast Wars and its sequel, Beast Machines. Somewhere between the running commentary about how bad the CGI looked to his young eyes, as well as pretty much everything else which crossed his young mind, I began to notice a few things in the details.

The premise of the Beast Wars saga is that it takes place within the same timeline as the original Transformers cartoon of the 1980’s, though the exact chronology gets a bit wonky with the element of time travel at work. Basically, the descendants of the original show’s Autobots and Decepticons are at odds with each other once again, only instead of transforming between robot and vehicle forms, now they have robot modes and beast modes. The noble, peaceful Maximals are led by Optimus Primal, who is descended from Optimus Prime, and the villainous, violent Predacons are led by Megatron, who deliberately takes his name from the original. The stakes of their war continually escalate towards cosmic heights, and many fall in battle on both sides, and in the crossfire, and yet there are intimations, especially in Beast Machines, that it is all by the will of a greater power: the Matrix.

And the Matrix, it would seem, is a schemer of divine proportions.

What is the Matrix?

No, this one is not a virtual reality prison for humanity as robots use them as batteries.

The exact question of what the Matrix is a little complex. There have been enough iterations of the Transformers story that it has been featured as a number of different things, including, in at least one, a massive source of power. Within the canon of Beast Wars, however, it could best be described as the god of the entire Transformer race.

The Transformers themselves are robots, as is widely known. But they aren’t just programmed automatons. They are true, sentient beings, with souls. For them, these souls are their sparks: a shining ball of energy held within their metal bodies. When a spark is born, a Transformer is born, and when it dies, that is their death. And all of these sparks, all of them, come from the Matrix.

The Matrix is the All-Spark, the source of all the souls of the entire Transformer race. Each spark is a piece of itself, divided from itself, sent out as an individual being when they are born. When they die, the spark returns to the Matrix, joining with the greater whole once again, adding all of its experiences into the collective. All the individuals become one once again.

Optimus Primal elaborates, at a pivotal moment, about the relationship between the Transformers and the Matrix:

“We are all but fragments of the Matrix, which releases each of us in order to struggle, and grow, and evolve, so when we return to it, it may grow and evolve. Thus do we serve the Matrix, not just by battling, but also my acquiring knowledge, wisdom, and experiencing love.”

So, it is the beginning, and the end, the creator, the source, the destination, the afterlife, and even the purpose of a Transformer’s entire life. Sounds pretty godlike to me.

And yet… if the Matrix is the source of all the sparks, and it takes in all the sparks after they die, learning and evolving and developing further, there are a few disquieting intimations in that.

First, the Matrix is still evolving. It’s still changing, with every new spark that is added into it. Thus, it can grow stronger and wiser, and greater, and it wants to.

Second, the Matrix is the source of all the sparks, which means it is the source of every Transformer’s soul, in their entirety, from Optimus to Megatron. Each and every one begins with what the Matrix makes them to be, and some of them even have specialized missions to perform on its behalf.

Third, it possesses all of the experience of previous Transformers. It is all of them, put together. It is every hero, and every villain, that the Transformers have ever had among them.

Meaning, it is capable of everything they have already done, and more, because, in a way, it has already done it, both by having all of their memories, and by birthing the next generation of them. So, if the changing Matrix wants to change itself in a specific way, to get stronger in a specific way, is there any limit to what it would do in pursuit of that goal?

What Does the Matrix Want, and Why?

“I serve the will of the Matrix… so what is it’s will?”

The plot of Beast Machines hinges on the answer to that question.

What it wants Optimus to do is, obviously, reformat the entire planet of Cyberton into something that is a combination of technological and organic. Techno-organic, it’s called.

But why would it want that?

Well, there are clear indications in the show that Cybertron was not always a robotic planet. This is a revelation which shocks the Transformers, but the proof is clear. Deep, deep beneath the planet’s surface, there are ruins from previous civilizations, but, even deeper, there are skeletons of various animals. There are seeds, too.

Here, in the depths, there is a massive computer, an archive and a conduit to the will of the Matrix, called the Oracle, which apparently foretold the coming of the first Transformers to Cybertron. Add that to the dead animal bodies, and it would seem that Cybertron was, in fact, taken over by the distant ancestors of the modern Transformers. They may or may not have simply wiped out all the organic life that was present before their arrival.

Machines, after all, are much stronger than flesh and blood.

So, perhaps organic life was dismissed as weak and useless by the early Transformers, which would indicate that the Matrix believed this as well.

But then, something extraordinary happened: organic life, in the form of puny little humans, played a pivotal role in the outcome of the Great War between Autobots and Decepticons, and even the defeat of the mighty, ravenous Unicron.

This would indicate that organic life had a strength to it, which had been overlooked thus far, no?

That thought, that knowledge, would migrate back to the Matrix in due time, with the eventual (and sometimes immediate) deaths of those who fought in the Great War, and the Matrix would come to see a value in organic beings. It would see them as strong, and it would want to add that strength to its own.

The only way to do this would be to reformat the entire planet, and all of its children, into something techno-organic.

How Did the Matrix Do It?

Obviously, it would have to work through its children. Most especially, it needed an obedient servant in the form of Optimus. But it also needed Megatron.

Cheetor says, straight up, in the series finale, that Megatron played his part in the grand design, and that Optimus fulfilled his mission. But it was only when Optimus realized that the both of them together, were the seeds of the future, the key to reformatting the planet and its people as the Matrix desired, that what he had to do became clear. Yet, there’s something more subtle, and nefarious, at work throughout the rest of the show.

What, exactly, was Megatron’s part in the grand design?

Ostensibly, the Beast Wars were fought to obtain organic material for Cybertron to be reformatted with. Yet that organic material was already present on Cyberton, and it was also obtained by at least one other crew on another planet. So, what was the Matrix really after?

Remember, all sparks come from the Matrix, so everything that they are begins with the Matrix, and eventually returns to the Matrix.

This includes Megatron, his scheming, and his desire to ascend.

And all of this served the scheme of the Matrix, its grand design to also ascend as the entity within a techno-organic civilization.

Why was all of this necessary? Why was Megatron, with all his schemes, his madness, and his delusions of grandeur, necessary?

Because not all Transformers would have welcomed this change, even opposed it.

As a prime example, we have none other than Rhinox.

He was one of the very best and brightest of the Transformers, easily among the kindest and wisest of the Maximals. It was small wonder that he became Optimus’ closest confidante and second in command. He was amazing.

But when he was faced with the sight of techno-organic bodies, he rejected the idea completely. He rejected nature completely. He subscribed to Megatron’s way of thinking, that their beast modes, and all organic material, needed to be purged from Cybertron entirely. That is a rather chilling decision for one of the best Transformers to make!

The last we see of Rhinox, he has died and rejoined the Matrix, and regrets what he has done, but that is a perspective that no living Transformer could share.

If Optimus, or anyone else, suddenly started telling millions upon millions of Transformers that needed to change in such a drastic way, because it was “the will of the Matrix,” can you imagine the reaction? The chaos, the fighting, the hatred? It would be massive, the entire population plunged into war once again, until either one side or the other stood triumphant atop the corpses of its enemies.

How else to avoid this calamity, other than to deny most of the living Transformers the chance to choose for or against it at all?

How to accomplish this, other than to have one Transformer possess the wherewithal to subdue the entire planet, with unmatched knowledge, scheming, and will? Megatron was a rebel unwittingly serving his creator.

By the time its over, the Transformers are all in their new techno-organic bodies, and who of them would complain, after the horrible, traumatic agony of having been ripped from their bodies entirely and devoured by the darkness of Megatron’s ambition?

Transformers reformatted, every last one: check.

Not in any sort of painless way, but, still, check. 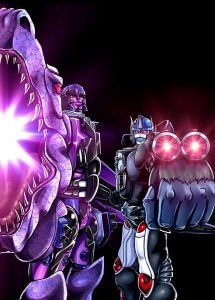 “We are the pawns of the Matrix.”

The Matrix creates all the souls of the Transformers, and it absorbs all of their experiences, as a means to develop itself, to become more than it was before.

It once dismissed the value of organic beings, but learned better, and wanted to add their power to its own.

This required reformatting Cybertron and all of the Transformers, which, many of them would refuse and resist.

Megatron was created to subdue all of them, paving the way for Optimus to achieve its goal.

For this, Megatron needed to gain knowledge and experience, which the Beast Wars were vital to. They were also vital to give Optimus the strength and wisdom to match Megatron.

And the Matrix is definitely a godlike schemer.

This entry was posted in Anime and Cartoons, Discussion, My Fan Theories and tagged Beast Machines, Beast Wars, Transformers. Bookmark the permalink.