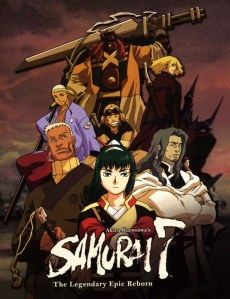 Have I mentioned how much I want to see Akira Kurosawa’s classic Seven Samurai? Well, I do. I really want to see it. All I’ve heard about it is amazing, and I’ve seen two, maybe three, of Kurosawa’s other films, so I know his work is legendary for a reason, and that film is hailed as his single greatest work. I’ve encountered so many stories which have been influenced by it, not least of which are the Magnificent Seven westerns, but never the original. Oh, how much I want to see that movie!

That urge is not at all dampened by Samurai 7, an anime reimagining of the classic.

The basic story is more or less the same, I think: poor farmers hire seven great warriors to defend them from the local bandits who have been preying on them, taking their food, their women, and anything else they want. The situation proves to be a bit more complex and intricate, though, and the conflict snowballs into what can only be justly called a war. The depths of each warrior’s soul, along with some others, is plumbed and revealed as the plot advances and the characters are developed. Several of the warriors die, but the war is won, and, in the end, as life goes on, it is the farmers, rather than the warriors, who are truly victorious.

That is the core of most of the seven-warrior stories I’ve encountered. Everything surrounding it, however, can be changed in surprising ways. The exact nature of each warrior, for instance, and how they come to join the effort of protecting the farmers. The quality of their skills, their weaponry, can also change. The bandits can be altered as well, as can the entire setting, the world around it. All of this can be changed, while remaining true to the spirit of the story.

What’s that old saying? The more things change, the more they stay the same? Maybe that’s why, and how, we can tell this story so many times, in so many ways. That is the draw of making something science fiction, or fantasy, or anything else: it’s still about us, and our lives. 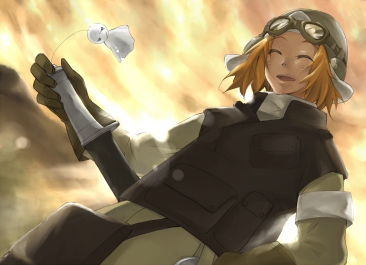 In this particular instance, we have the remote Kanna Village, sitting on a great, forested shaft of stone surrounded by canyons. Here, the villagers live their humble, hard-working lives with almost nothing but the land itself to their name. They are continually harassed and robbed by huge, robotic bandits, called the Nobuseri, who take their precious rice, and sometimes take the most beautiful women as well. Resistance elsewhere has always been met with a swift and devastating response, as the bandits have huge guns and swords and strong bodies made of metal.

Having had enough, but in despair of what to do, the villagers decide to hire samurai, with only their humble rice to offer in exchange. And so they send their water priestess, blessed with the power to dowse for water and divine truths, to find such men as will come and might succeed in saving them.

This brings us to the seven samurai themselves: an old veteran who has never won a war, and lost tremendously in the Great War a number of years earlier; a former-samurai turned entertainer, quick to make people smile but a bit addicted to the thrill of danger and shedding his own blood; a drifter who has more in common with engineers than other samurai, but has a deep appreciation for the blessings of life, and a deep shame for a past misdeed; an old comrade of the first samurai, a skilled and capable vice-leader, friendly and capable with people, who has a happy life waiting for him if his loyalty to his friends doesn’t get him killed first; a young, hotheaded amateur who aspires to become a great samurai, and grows tremendously, and learns many difficult lessons along the way; a cold-blooded loner, the best fighter of them all, enigmatic and dangerous; a very, very loud-mouthed fool, very large and strong and frank and lacking every capability of subtlety, but honest and pure in surprising ways, and he used to be a farmer before he became a machine samurai.

“We are samurai. We are badass. We are dramatic.”

Yes, about that last: apparently this world has floating fortresses, robots, and it’s possible for a man to become a machine. This is the origin of the Nobuseri, as they were once flesh-and-blood samurai themselves. It’s not really explained how the transition works.

In fact, that’s something of a point against the show: transitions suddenly happen and there is little in the way of explanation about it. There’s a coupling in the works from the beginning, between the water priestess and a samurai, but suddenly it changes to be another samurai she is fascinated with. There’s a minor villain early on who concerns himself with little more than adding to his harem, but suddenly he’s not only a capable, cunning villain, but the ruler of all the land and the final, overarching villain of the show. The hothead samurai grows progressively as the show goes on, but suddenly he’s a full-fledged samurai warrior, wielding techniques we’ve never seen him learn anything about. That sort of thing.

The lack of explanations, of sense, is particularly pronounced when one considers how long and drawn out the show is. They take their time recruiting the samurai, and even when they have seven, they don’t acknowledge all seven as part of the seven until just before the fight with the Nobuseri bandits. Then they fight the bandits, and deal damage, and trick them, and bring down their floating fortress. And then they have a few bandits survive… no, wait, make that a notable force of bandits surviving the fortress exploding around them, and the fight drags on. And then they go into rescuing the kidnapped girls and the convoluted setup of the final confrontation.

Basically, there’s a bit of a pacing issue.

And where the show ends with the victory of the farmers, it kind of did so with the absolute destruction of the reigning powers that be. This may have been necessary, but what the heck happened to the rest of the empire afterward? We never see it, the show ends there.

Seriously, who would not go to war for her?

Yet, for all these flaws, I find that I love most of the characters. With exception to the pissant who becomes emperor, I enjoy their many experiences immensely. Even the loudmouth, which would usually annoy me to no end, is sweet and endearing in his way, so honest and wearing his heart on his sleeves. The drifter’s calm attitude and cheerful disposition make him another of my favorites. The honor and compassion of the samurai leader, the sweet candor of the little girl priestess, the silent resolve of the loner, they’re all endearing in some way. And I found that I could never look at the water priestess without noticing how beautiful she is, and the strength of her spirit. Heck, even the Nobuseri bandits had something redemptive to them, and I couldn’t help but feel for them, given their eventual fate.

The story may be so very slow, but it is also compelling and intricate. What is more appealing to the masses than a story about the masses, the poor people who have been pushed to the brink and beyond, actually doing something about it? What is more riveting than a story where the weak and submissive become strong and defiant? That their growth is guided by noble warriors is the same as us, being taught by the story. Then to reach further, higher, to have the warriors grasp at the root and crown of the corruption which festers in the land, and rip it out, in the defense of humble, everyday folk, is inspiring.

It’s a samurai story, an epic about survival, honor, and freedom, and that is not such a bad thing.

All that said, having mentioned both my compliments and my complaints, there is a lot about the show that is fairly standard. The design, artwork, animation, combat, world-building, English dubbing, soundtrack, all nice enough, though not outstanding. It’s not always exciting, but not always boring either. Heck, even the names of the characters (have you noticed I haven’t used any in this entire review?) are kind of “meh.” They don’t stand out that much, even from each other. Which is odd, to like several of them so much while still confusing their names. But oh well.

Samurai 7 is a good anime. Not great, as it might have been with a bit of streamlining and refinement, but good. It tells an interesting story featuring lovable characters, and it took on quite a task, re-imagining one of the most classic movies of all time.

…now if I can just get my hands on that movie…

This entry was posted in Anime and Cartoons, Tuesday Review and tagged Samurai 7. Bookmark the permalink.