We are humans, and humans have a drive to survive. ‘Tis only natural that we imitate various dangerous crises in our entertainment! We are all excited by conflict to some degree, as it speaks to our survival instincts, and we are inspired by the daring and courage and skill that our heroes display in facing down danger. It gets the adrenaline pumping!

It’s also simple and clear, in a way.

Stakes of life and death are so easy to understand, because they have an immediate, universal impact. There are no unspoken social norms to adhere to and no convoluted complications. One either survives, or not. That’s it. Compared to the delicate intricacies of human relationships, as every man from Harry Potter to Ned Stark knows, action is straightforward and honest. As such, stripped of any rules except those we impose on ourselves, a man’s character is unveiled in its entirety, in either his nobility, brutality, loyalty, or cowardice.

Small wonder we love it so much!

And our love for action naturally leads into a love of adventure.

For as long as there have been humans, we have left our home, our shelter, our cave, and we have gone out into the world to obtain something, typically food, before returning home in triumph. We are compelled to go out our front door, do something with our lives, and improve ourselves through it. When what we need to do is more than just secure our next meal, we have to go farther, and stay away longer. The longer we stay away, the more we change, for better or worse. Eventually, however, the road always leads us back home, with whatever we have obtained.

Adventure, in a nutshell.

It would seem, as we shift away from discussing the characters, their relationships, and the voices behind them, we are now discussing the stories which surround them, namely the genres. I’m very glad Action was the first one, as it is so distinct and obvious. Now, the next few categories, being Harem, Comedy, Drama, and Slice of Life, may be proving a bit more difficult, simply because they tend to bleed into one another so often. But we’ll get to those soon enough.

For now, let us bask in the fiery glow of conflict and ruin and triumph, of journeys taken and lessons learned, as found in five five action-packed adventures! 🙂

Two brothers embark on a long journey, full of perils and trials and friends and enemies, which eventually brings them face to face with an ancient evil at the heart of a most foul and deadly conspiracy.

The action is smooth and fun to watch, plain and simple. The way they incorporate alchemy into combat is entertaining and, within the realm of alchemy being real, believable. It’s a tool, as diverse and powerful as you can imagine it, built on scientific knowledge. When they manage to do more remarkable things, it’s because they have the exact means to do so, and they use it effectively. Very few people are stupid in this show, and the action is fueled by their own resolve, and their wits. Not to mention, it has some of my favorite action-oriented moments, including the best turnaround ever. In a word: “AMMONIAAAA!!” 😉

It’s a fantastic adventure as well, not only taking the protagonists to every corner of their country and sometimes beyond, but meeting all sorts of people, encountering wonders and dangers, and continually learning new things. In the end, it all comes down to what people fight for, and that, too, offers a multitude of answers. And what happens after the fighting is done? Living on.

A great warrior follows a cunning woman on her quest to collect twelve powerful weapons made centuries ago, fighting each of their keepers in turn, little knowing the repercussions which will inevitably follow.

The fights are well done and highly exciting, each one more so than the last. But even more, it gradually subverts the mechanism of fighting within our stories, asking questions of morality and the value of human life. At first, it is so nonchalant and cavalier that it’s comedic, but soon enough, the tragedy of any life lost becomes apparent, giving rise to more difficult, complicated themes than a simple contest of good vs evil.

All this while the main duo of Shichika and Togame travel around a wondrous landscape, visiting places in various states of decay or decline, yet leaving behind a spark of renewal in one or two places. Shichika grows tremendously through this journey, becoming a much more developed, thoughtful, and well-rounded character. And that is what adventure is for: growth and improvement.

In the far future, a pair of bounty hunters travels the solar system, just trying to make ends meet as they encounter a multitude of insane, dangerous enemies.

The fighting, and the action in general, is very well done and largely realistic. That gives a greater weight and tension to the climactic fights, and it also makes the more everyday fights more gripping and thrilling. Anyone can pose a threat, and when one man takes on a veritable army, his victory is anything but assured.

Unlike my other picks, though, this is ultimately a tragedy. The protagonists are self-destructive, and they lose most everything they hold dear, including each other. The final triumph comes not in a hero walking away from a fight alive, and not even in how he vanquished his enemy, but in dying in peace. It’s the ultimate journey through the hardships of life, and the ultimate return through death. It is the ultimate adventure: to live, and die. 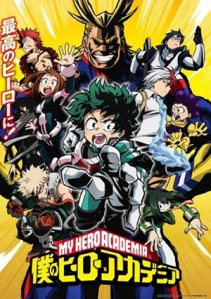 A young man’s journey to becoming the greatest hero of his generation, inheriting mantle of his teacher.

Out of all of my picks, this one probably has the most intelligent fights. Some are very short, and few are very long. Why? Because the various superpowers are used effectively, instead of just dramatically. The simple determination of the characters is actually relevant as it motivates their extraordinary accomplishments, but it’s not a superpower unto itself, anymore than mere strength decides a fight. It’s the use of one’s wits, one’s ability to analyze and adapt, paired with one’s endurance, which decides the day. It is exceptionally well done.

At the same time, the main character, Deku, both learns and demonstrates what it means to be a hero. That is the heart and soul of the story: what it means to be heroic, or villainous. The idea of heroism itself is subverted and questioned, as is people’s understanding of and fascination with it, as well as what can be most appropriately called, “hero worship.” There  are lessons, and losses, and triumphs, and tragedies. That is how one grows.

An outlaw with a huge bounty on his head brings justice and mercy to a savage, barren wasteland of a planet, surviving with just his wits and his gun, and a friend or two, all while a most nefarious evil from his own past closes in, seeking nothing less than the annihilation of all of humanity.

Just how many crazy people with crazy weaponry can there be on one sand-covered planet where civilization is scarcely one step removed from the wild, blasted sands around it? Nevertheless, they are met by an even crazier man with an even crazier gun, who happens to be benevolent. So within context, and with a bit of leeway for the hero’s extreme precision, the fights are actually quite realistic, if also displayed with a bit of dramatic flair. In the contest of survival, the hero believes that everyone should win, and that is what he fights for.

And that is also the heart of his adventures. Everything he believes is contested by both friends and enemies alike, as he moves from place to place in an endless wandering. In the end, he himself has to question the ideals he has always espoused, and the result is neither letting go of them, nor clinging too closely. It is an experience wherein he finally, at long last, grows up, and finds his own center, instead of using someone else’s. Thus does his adventure have meaning.