This week’s Agents of Shield was a very psychological episode, built entirely around Fitz-Simmons. It was sad and scary and happy and all around a very fun ride through their minds and their past towards their future. 🙂 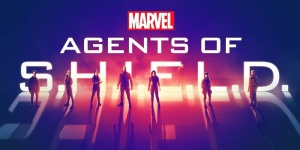 It was all about Fitz-Simmons in this episode. Where they come from, what makes them tick, the good, the bad, the ugly, the scary, the powerful. They are magnificent and unstoppable together. …they might need some therapy, though, and this was a very therapeutic episode.

The two of them wake up in a plain, white room together, one where everything they think of is possible and every memory is shareable. Atara appears to explain things to them and tell them that they can’t escape. Any attempt to do so will result in madness. So, the way out is, quite simply, to figure out time travel, so Atara and the Chronicoms can go back in time and save their world.

The ramifications of this are huge. I mean, the power to change all the bad things that happened? To meddle with the past and mold entire timelines anytime you think this one isn’t fair? To save or condemn… everything? That’s pretty godlike, but mortals aren’t gods. Mortals are invariably wrong about something, and when you can shape all of time, that is a very bad time to be wrong.

And, as it happens, the entire time traveling ordeal is very painful for Simmons to discuss or even think about. Which is kind of a good thing, in the big picture, but a bit dangerous and awkward for the two of them right now.

Things start out well enough. They sit, enjoy treats together, and Fitz tells her all about the last year, while she adds in what they’ve been doing while on Fitz’s trail. They’ve been to some of the same places, as Simmons gradually closed the gap between them. But soon, the topic turns to time travel, and Simmons reacts defensively, refusing to cooperate. We talk about how we react like children but Fitz just a teensy bit surprised when Simmons suddenly is a little girl, throwing a tantrum and running away, through a magical hole to her childhood bedroom.

In reality, the two of them are hooked up to a machine that puts their minds together in some sort of virtual space. Enoch opposes this, as it is very risky, and the danger mounts, and if they die, Atara and the Chronicoms will have gained nothing for their troubles. Yes, the human mind is powerful, but it’s also very delicate and filled with unstable emotions, so he implores Atara to stop this. But Atara, Malachi, and the rest will not listen. As far as they’re concerned, this is the most efficient way to get what they want, so Enoch can either stand with them on this, or be dismantled.

As Fitz realizes that they’re in a prison of their own minds, he tries to get Simmons back to her usual self. As a little girl, she’s hiding in her bed, “observing… from a distance,” in that place where she always went to work out her problems, as her mind went up to the stars and all her troubles were locked away in a music box. She wants to be read a story right now, and it looks sweet and childish, but the cover is actually that of the Darkhold.

Fitz takes one look at that cover, drops it, and pulls her out of bed and back into their white room, wherein he talks as if he would conjure up Aida to help him, and she snaps back to her adult self. That’s when Fitz is able to draw out why she’s so afraid to talk about all of this time travel stuff, because of what it means. It means telling Fitz the truth. All of it.

He proposed as soon as he had his hands in hers, but now he finds out that his future self has already proposed to her, already married her, and already died breaking a time loop of their world ending. He sees his own body in her memories. He sees their rings. And he sees Coulson, soon to die. One of the last things he told her, in effect, was to go and find the Fitz who was still in cryo at the time, the slightly-past version of their Fitz, who has now gone off in a very different direction. Mack had his reservations about that, but he was also the first one to help retrofit the Zephyr to jump all over space looking for him.

All of this is a lot to take in. It’s a lot to process. Small wonder Simmons didn’t want to approach the subject. But it’s done now, and they have to move forward. Starting with supporting Fitz as he starts working the problem too hard. She hears a sound, in their heads, one that she doesn’t like, and goes to find him.

She finds him in his room at Shield Academy, on a pivotal night of their relationship. It’s the first time she came to his room, and they talked, bouncing ideas, and this was the night Fitz went from terrified to comfortable in her presence, and the one where Simmons put him in the friend zone. She also remembers seeing that he was a bit manic, and thinking that brilliance can be just a tick away from madness. She is uncomfortably familiar with Fitz’s madness, and now she knows it’s coming back. As Fitz is working a problem about time travel, he can’t help but think of the Hell that she’s been through, and the pain of not being there for her, and if an entire race is feeling that… then maybe they should take control of time, and undo anything they want.

And therein lies the danger. When flawed mortals aspire to the powers of divinity, it does not end well. Many things have begun with noble intentions, but in the space of a blink they become corrupted. And what is Fitz’s corruption? Leopold, of Hydra, coming with the sound of booted feet on the march. Fitz’s darkness, the shape of a psychotic break she’s already seen him suffer once. He’s there, in Fitz’s mind… and so are the two of them, in their minds.

They run, fleeing the evil mad scientist who commands an army. They run where Simmons always runs: back to her childhood room. She was always safe here, but they soon find that Fitz’s inner darkness isn’t the only one they have to worry about. Simmons’ music box is bouncing and rattling like something possessed, and when it falls and opens, her darkness comes out too. It’s her, but so disheveled, and filthy, and mad that she’s unrecognizable. She comes for them, shrieking, and they hide in the closet before they’re suddenly separated, facing each other’s evil.

Leopold takes Simmons and binds her into the memory machine, intent on taking the memories he needs and hollowing out the rest of her. Simmons’ evil whatever-she-is hangs him upside down and dissects him with a bone-knife, including removing the heart he said was hers. The two of them are hurting each other, but they rally together. They’re not alone. They still have each other. And they have friends. Mack shoots the monster holding Fitz and gets him down, sending him running. Daisy overwhelms Leopold and the Hydra soldiers, getting Simmons out and sending her running. They run into a containment chamber from opposite sides, locking it shut. They’re in there, together, safe and screaming at each other while their shadow selves circle around outside.

The truth is that they’ve hurt each other. Quite a bit. They’ve endured incredible amounts of pain, both together and individually. It begins with that moment when Coulson recruited them, but it centers around themselves. The people we care for are a source of pain, because they are important. To care is to open oneself up to that pain, and it hurts, a lot, but it’s so much better than feeling nothing at all. They hate having to be saved, but they’ll never stop saving each other. They love each other, absolutely. They shout out years’ worth of pain and trauma, but they’re ultimately shouting that they love each other. So, when they’re breathing normally again, they resolve to face whatever is out there together.

…of course, their shadow selves aren’t really a concern once that happens. They’re too busy making out. Which would have to be one of the most surreal things these two have ever experienced together.

Heh, I remember this one time where my friends and I were talking about our dark sides, and evil alternate-dimension versions of ourselves. Somehow it came up that my evil self and one of my friend’s evil self would absolutely hook up, and it would be one of the most unhealthy relationships ever in the history of unhealthy relationships. It would be a disaster… but it would also be pretty fun in the meantime! LOL. So, I can actually grasp the interest with what evil Fitz and evil Simmons would do with each other, but that sort of thing generally stays in the realm of imagination, never actually seen, ya know? Heh, small wonder Fitz-Simmons could only stare in morbid fascination at the kinky stuff their dark sides to together.

They really are made for each other. Both sides of them.

At the end of it all, and it’s apparently only been a few minutes, Atara appears to try and get them to focus on what they need to do. Thing is, Fitz has decided that he’s not going to help them. They’re all right being locked up forever, together.

Atara is just telling them they won’t be when Enoch comes through. He disables all the other Chronicoms with a signal, releasing Fitz-Simmons and transporting the three of them off. Oh, and Simmons is just starting to tell Fitz about Deke when they vanish. Episode ends.

Well, there that ending scene where Daisy has updated Mack on the situation. Knowing Fitz is alive is overwhelming, but he’s glad. And Fitz-Simmons are together, so they’ll be fine. They may have even broken out already. And now it’s Mack’s turn to update her. Short version: whatever destroyed the Chronicom homeworld seems to have made its way to Earth.

And then the episode is over.

This entry was posted in This Week on TV and tagged Agents of Shield. Bookmark the permalink.