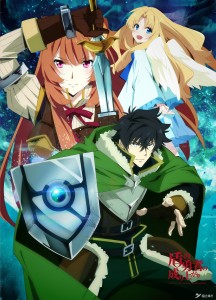 The first thing I heard about Rising of the Shield Hero was the controversy surrounding the events of the first episode. The previous season had sparked outrage with the graphic depiction of all things horrible in Goblin Slayer, and now this season outraged people for daring to have an innocent man falsely accused of rape. That is a subject for an entirely different discussion, but I have to say, when the first thing I know about a show is that it figuratively takes the heads of those self-appointed censors and perpetually-offended censors regulators of all our entertainment and makes them explode… well, there are worse first impressions! 😉

That said, I still applied my one-episode rule, and judged as fairly as I could for myself (concluded that the outrage was utter nonsense), and proceeded from there.

Rising of the Shield Hero is a fantasy isekai story that turns the usual formula on its head, and it tells an interesting story with lovable characters and a variety of powerful themes. But it tries to do a bit too much and a bit too little at the same time. It’s enjoyable in its way, but it’s easy to see how it might have been improved.

Starting at the beginning, we have the Four Heroes, who are summoned from four different worlds, and four different Japans, to use special, magical, legendary weapons and battle the incoming Waves of Destruction or whatever they were called, and save the world. If they win, they go home, and if they lose… well, they die, and this world ends. Thus, they are given funding, skilled party members to work with so they can level up and fight the Waves, and, of course, the praise and admiration of the entire nation. …at least most of them are given that. The Heroes of the Sword, Spear, and Bow get all of that. The Shield Hero, Naofumi, gets none of it.

Instead, Naofumi is very badly treated from the start, and it only gets worse when he is stripped of everything, including his good name, as he is accused of a most heinous crime he did not commit, assumed guilty, and cast out. From there, he has to make his way with little more than his wits and his will. Slowly, he crawls his way out of the dirt. He rises (thus the title) to become the greatest and most powerful of the Heroes, no matter the great heaps of misery that the powers that be drop onto his head. Along the way, he deals with issues of racism, religion, politics, elitism, philosophy, and more.

Now, that sounds like a rather compelling setup, and it is. It can be riveting and deeply emotional when it’s done well, but… well, the characters, themes, and storyline could all be improved in obvious ways.

There are lovable characters, especially the three girls who join Naofumi’s party, but others are more like set pieces or drones, and the Heroes, even Naofumi, have severe attitude problems. They don’t work well together, they almost never help each other unless it’s in their own self-interest, they avoid taking responsibility for their own actions, and they constantly bicker over the tiniest of disputes. Even after being served some humble pie, they walk around like they own the place and know everything. In short, they’re a quartet of self-important, egotistical dimwits.

I can appreciate the virtue of confidence, especially when it has been earned through one’s own efforts (and Naofumi puts in a lot of effort), but the Four Heroes are just really, really arrogant and short-sighted. That extends to when they all fail to see the truth dancing naked in front of their eyes.

In a similar vein, there are the obvious powers at work based on race, religion, and so on, but these are all obvious and lack any form of subtlety. Yeah, this guy’s an evil racist because he enslaves demihumans, even torturing and killing children. Not subtle. Yes, this guy is evil because he treats his devout followers like disposable pawns and tries to kill the Heroes for his own benefit. Not subtle. Yep, this princess is evil because she’s a pathological liar, goes to great lengths to make Naofumi miserable, and tries to kill her own sister in order to get the crown. Not subtle, and not at all sympathetic when she finds that the people who have been using her intend to kill her too.

Indeed, there’s not much in the way of subtlety at all anywhere in the story. Not in how Raphtalia is obviously trying to attract Naofumi’s eye in a more intimate way, or in how such-and-such characters are obviously Heroes from yet another world (seriously, just how clueless can Naofumi be, on both counts?), and not in almost any other way.

Now, all of that said… somehow it’s enjoyable anyway, in its own way. That is largely due to the demihuman Raphtalia, and the other characters which surround the Heroes, and even to the story of how Naofumi develops his skills. That is in spite, not because, of his attitude problem. It’s also due to the fights, how Naofumi and his party rise to meet each obstacle, while the other Heroes take the more minor role of “being useless” and their respective parties take the even more minor role of “background scenery.” The best part, though, is in the more calm, quiet moments, where the characters connect through their honest emotions, and sometimes have fun and develop stronger bonds between themselves.

This is an action-based fantasy, but the best parts have little to nothing to do with the action.

These three together, I loved.

My favorite has to be when Naofumi sees, for the first time, that Raphtalia is a grown woman, capable of making her own choices, and choosing to stay by his side. That is a superbly crafted moment, when he is finally able to cry in the arms of someone who genuinely cares for him.

Shortly behind that is the moment when Naofumi and Raphtalia fear that their avian friend, Filo, may have eaten a young girl, and the interplay between the two of them in that moment is hilarious, albeit because we already know that nobody has been eaten.

And I loved those moments when Naofumi seemed to actually be softening, and allowing himself to truly care for those closest to him. Even if he hid such beneath a surface of cold practicality, it was his caring which drove him to improve his skills and grow steadily stronger.

But the show has some good action and an interesting, layered fantasy world. It has powerful, emotionally honest moments that make it so you can’t help but love it a bit. It has humor and tears and it does not shy away from difficult subjects (though it treats them with a profound lack of grace). It’s entertaining, in its own way.

Rating: I give Rising of the Shield Hero 7 stars out of 10.

This entry was posted in Anime and Cartoons, Tuesday Review and tagged Rising of the Shield Hero. Bookmark the permalink.

9 Responses to Anime Review: Rising of the Shield Hero