It is a thing.

A very important thing, in fact. 😉

When it comes to the term “slice of life,” you’d think it’s straightforward enough to not need further explanation. But, in the tradition of every other term used in entertainment, it gets fleshed out the more people use it and talk about it.

Generally, slice of life is a depiction mundane, regular, ordinary, everyday life (thus, the name) with little in the way of actual plot, conflict, exposition, or proper resolution. As it applies to anime and manga, in particular, there is the inclusion of melodrama and exaggeration, bordering on the ridiculous and absurd. It can be set in schools, cafes, work places, you know, where it’s normal for one to spend a great deal of time. It chronicles a number of dramatic and comedic events, thus the difficulty in separating it from other categories of anime. It may prove long and uneventful, or not, but what keeps it going is usually the interpersonal relationships of the characters, low-key as they may be, including some romances. There can also be themes of coming of age, and fantasy and science fiction may make surprising appearances in order to spice things up a little.

All that said, I find slice of life to be annoyingly difficult to nail down. It’s realistic, with perhaps some exaggeration, but how exaggerated is it really allowed to be before it is considered something else? It has little in the way of plot, but how much plot must there be in order for it to be something other than slice of life? There is drama, but how much drama must there be before it is considered a drama?

I overthink these things sometimes. Or have you noticed? 😉

In making my selection, I had just a few criteria in mind: 1) as few fantastical elements as possible, 2) arguably easy to separate from the comedies, dramas, and harem anime I’m also commenting on, and 3) I’ve watched all of it, or at least a significant portion past the first episode.

It was annoying how many titles I could name that fail at least one of those requirements, especially the third one.

Still, I managed to pick five of them, and now, in no particular order:

A young girl, fresh out of high school, gets a job helping to make video games for her favorite game-making company. There are a few oddities, not the least of which is her supervisor’s tendency to go without her pants and a neighboring supervisor’s love of guns, but it’s generally just a normal company going about its business. It’s probably the most realistic anime I picked for this list, small eccentricities notwithstanding.

A family restaurant has some very unique employees. They’re all crazy in some way, some more pronounced than others. The results are pretty hilarious. 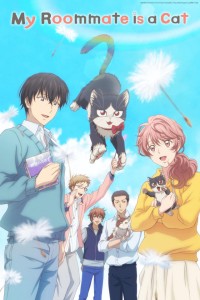 A writer who recently lost his parents adopts a stray cat. And the cat adopts him. Very slowly, their influence on each other brings more happiness into their lives.

A group of girls wants to dance, so dance they do. They each have their own issues to work out, but they are beautiful as they dance together. 🙂

Ok, maybe this one is the most realistic.

A woman with some issues gets a job in public service, with some eccentric coworkers. They make friends, they build relationships. Life is good.

I know there are a ton of other slice of life anime out there, so, what are some of your favorites?

This entry was posted in 30-Day Anime Pick 5 Challenge, Anime and Cartoons, Challenge Accepted and tagged Hanayamata, Listen to Me Girls I Am Your Father, New Game, Servant x Service, Working. Bookmark the permalink.

5 Responses to 5 Slice of Life Anime