Nobody walks this life for long without knowing what it means to lose, and grieve for it. Even Disney does not avoid this, in fact, they are rather notorious for it. If there is one thing which can prove that anime is not just for kids, it is the honest depiction of loss, and grief.

I have said it many times: quality storytelling involves a bit of sadism. You have to make your characters and your audience cry rivers of tears sometimes. 😉

I had no shortage of such moments to choose from. I think I only picked the ones I picked because of the impression they left on me, personally.

In, as usual, no particular order, I present five sad moments from anime.

…heh, I feel a bit like I should be saying, in a voice like Inigo Montoya, “Hello. My name is Merlin. You read my blog. Prepare to cry.” 😉

Yusuke Urameshi thought he had nothing, that his life was a complete waste. Then he gave his life saving a kid from a car, and learned otherwise. As a ghost, he attended his own funeral, and he saw that he did, in fact, have a place in people’s lives. His friend (and romantic interest) cried her eyes out. His rival, and unorthodox best friend, howled in misery. His teacher shed tears, mourning the greatness that could have been, when Yusuke thought he had been worthless. And his mother was all but wordless with grief. And if that’s not enough… the child who he saved, he liked him, and didn’t really understand that he was dead yet.

How does this not tug at the heart-strings?

You never know what you got until it’s gone. And when Yusuke sees the hole he’s left behind, his attitude finally fades, and he wants to live again.

2) Last Song of the Rumbar Pirates
One Piece

One Piece has a lot of very sad stories within it. Each backstory that has been explored thus far has been rife with tragedy. It’s anyone’s pick for which one is the saddest, and which moment in those stories is the saddest. For me, it tugged my heartstrings in every direction when we see the joy of triumph and hope in the present mixed with the incredible loss of Brook’s past.

He is the only one of his friends to still be alive, and even he died before coming back. He has spent fifty years in absolute, and almost completely uninterrupted, isolation. I don’t think he would have survived that, so to speak, if he hadn’t had his crew’s lingering joy and defiance to carry him. And the moment they die… they choose to go out swinging in the only way left to them: singing.

It’s a final act of courage, and love. Their last, fleeting hope is that a dear friend of theirs will hear this song someday. It is their last gift to him, and they smile in joy even as they die, even as each voice, their song, falls silent.

No, I did not need a tissue when I saw this… I had my sleeve on hand. 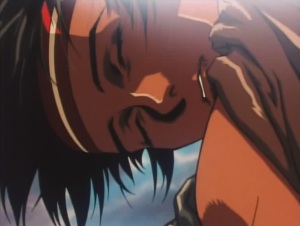 I wanted to share videos of all my picked moments, but YouTube blocked everything I uploaded. That sound in the background right now is me, muttering curses at them under my breath. But, moving on! 😉

This was one of the first deaths that I experienced in anime. And the friend who already knew it was coming, the first time we watched it together, skipped the entire scene so I wouldn’t see it, and the entire next episode as well. He did not want to deal with me tearing up. I only saw it later, when I finally purchased the series for myself. And… ok, yes, I teared up, and I am not ashamed.

This actually has two parts to it. The first part is Orson’s death itself. He makes the ultimate sacrifice to save the woman he loves, and it is very, very tragic, though also triumphant. He gives himself back to a destructive spirit, becoming a berserker, and slaughtering everything in his path, but his wounds are too grievous, even for him. There’s a moment when it’s clear that he’s about to die, and Shiris offers to die with him, but he falls dead before he can deliver the blow. The episode ends with Shiris grieving.

The next episodes begins with that same moment, and this is what made me even sadder than Orson’s death itself: her grief is overwhelming. She knows he died for her, and she is screaming at him, over and over, “You died for nothing!” That is how low she feels, utterly bereft and worthless.

And that… that is truly sad.

Again, no tissue… I was young enough that I didn’t bother with that when wiping away my tears. 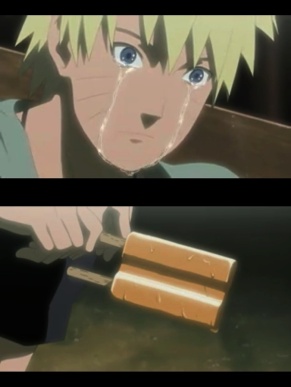 That silence, as his popsicle melts… yeah, that completely did me in.

Curse YouTube and copyright and such for not letting us share these moments in all their unabridged glory. …then again, perhaps there are enough tears being shed in this post as is.

The scene follows after Naruto learns of the death of his teacher, Jiraiya. He never knew his parents, making Jiraiya the closest thing to a parent that he’s ever known. Jiraiya died in battle, trying to scout the enemy and unravel mysteries, and he managed to leave one last encoded message, a last help for his friends, but that is of little comfort to those left behind.

Naruto has people to support him, and a friend eventually pulls him out of it, but, well… grief is something that is inevitably endured alone. We always process it within ourselves, and feel its weight, and the ache of those who are gone. In Naruto’s case, he can’t sleep, very late, or very early. So he gets up, goes to the store, and gets a popsicle. And then he just sits there, in the night, under a light. He sits there so long that his popsicle melts, dripping slowly to the ground. Like the tears that soon flow freely from his eyes. He weeps, quietly. He is the loudest loudmouth on the show, but he mourns so very quietly.

It’s heart-wrenching, not only for the loss and the sorrow, but also because of how stark and real it is.

I didn’t cry when watching this one. I just breathed. And sniffed. A lot.

Finally, what might seem like the most mild example. After all, I’ve chosen four instances which revolve around death, and the grief of those who are left behind. But there is another form of that, and it is when someone literally leaves and literally leaves their loved ones behind.

Kenshin has been a wanderer for a decade or so, but after all that time, it seems that he has finally found a home. He’s also found a woman he cares for so very deeply, which, this is another thing he thought he’d never have again. All this time, he has been fighting his own demons, trying to suppress his own violence. He has been a monster on the battlefield, cheered by his allies, feared and even respected by his enemies. All that killing took a toll on his soul, and he has worked ever since to avoid being such a monster again. But now… now his hand is being forced.

When he says goodbye to Kaoru, he is leaving her behind with virtually no hope of returning. Even if he survives, he fears that he will be his worst self again, not truly the man that she loves. So he tells her goodbye. And then he turns around, and walks away, into the darkness, leaving her behind. He leaves her to weep for losing him even while he’s still alive.

That is a parting unlike most, and perhaps even more painful than a death. Death is the end of a life, but until one is dead, one can have more moments of living, and loving, and being with those one cares for. But to say goodbye and leave forever before one is dead, that is to lose all of those moments, even as what might have been, and what could still be, dangles like a carrot in front of a our nose. Time passes, and are they still alive? Are they dead? Will they ever come back? Can they be found, and brought back to themselves? These are the questions which plague people who have parted ways. There is no such solace as is found in the words, “They’re in a better place” and “We’ll see them again.”

That makes for a whole other level of broken-hearted.

Small wonder Kaoru hurts so much that she goes into shock afterward.

And that’s my five picks for sad anime moments. How about you? What moments in anime have ripped your hearts out?