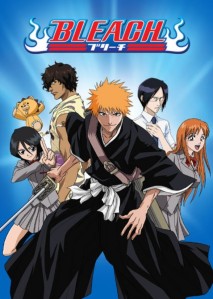 In Japan, voice actors, or seiyuu, are pretty much required to act, sing, be idols in a band, and a whole lot more that western people just don’t think to expect of them.

In the USA, voice actors are exactly that: voice actors. And nothing else. Usually. Ok, while they can do other things, like live acting, or music, or heading a studio or whatever, we Americans tend to think of voice actors as only voice actors. Nothing more is required or expected for them to be voice actors.

Let this lesson be learned: to draw with exceptional creative ability is not the same thing as to tell a good story effectively.

I rush to make it clear that Bleach is highly enjoyable, in its way, and a great deal of thought and effort clearly went into it. But it also earns some fair criticisms, and serves as an example to aspiring storytellers with both the accomplishments and the mistakes found within it.

The story primarily follows Ichigo Kurosaki, a human with a bit of spiritual awareness, and his friends. A twist of fate brings Ichigo into contact with Rukia Kuchiki, a shinigami, or soul reaper, whose job it is to reap wayward souls and strike down those who have lingered so long that they have become monstrous, a threat to both the living and the dead. In a moment of dire need, Rukia shares her power with Ichigo, turning him into a substitute reaper, unleashing a vast, untapped reservoir of spiritual power within him. This fateful encounter sets into motion events which will alter the course of their lives and determine the outcome of pivotal confrontations to come as nefarious conspiracies are brought to light. 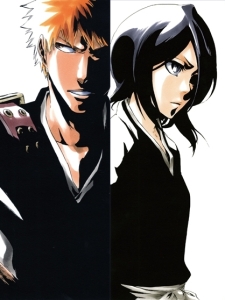 The major selling points of Bleach, much like those of Zoids, are the battles, the characters, and the music, all of which are superbly crafted. The major points against it are the shoddy overall plot and the lackluster world-building. Oh, and way too many characters.

To start with, the battles are among the best I’ve seen, in their way. They use fairly unique magic systems to create a variety of special abilities which are all thrown against each other in gripping battles that are both flashy to behold and riveting to witness in their significance to the characters. It’s a fairly intelligent way of fighting, though fairly dramatized and drawn out a bit, much like in many similar stories like Naruto, or One Piece, or Fairy Tail. There are better fights, and worse fights, and some fights that are just there to be flashy and take up some time. For the most part, it’s pretty fun.

The characters are all very well designed, and interesting to watch. There is a truly diverse range of appearances and temperaments to be found here. Mind you, it can get to be a bit much, as there are entirely new sets of characters, heroes and villains alike, introduced in each new arc, but everything about them is exceptionally well-crafted. Their history, their abilities, their appearance, their demeanor, everything. Superb. And, especially, their interactions.

The reason we watch or read stories as long as this is because we come to care about the characters, and that is accomplished in how they interact with each other. Whether they be honorable adversaries, albeit ruthless enemies as well, or friends and comrades, or captains and subordinates, I love watching these people. My single favorite moment would have to be when one captain made his introduction to his foe while having his lieutenant sprinkle sakura blossoms from a balcony overhead, which she did, and then poured the entire basket onto him, and threw said basket straight down onto his head, all without a word. Heh, somehow that just always made me crack up! 🙂

And then, like many a classic anime, there’s the music. Seriously,  I don’t think this anime would have lasted nearly so long if not for its soundtrack. Whatever moment we are in, the music is pretty much perfect. 🙂 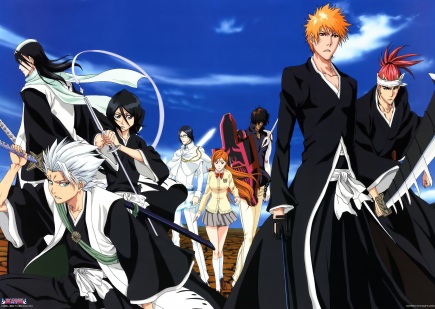 “Get ready for battle…”

I can scarcely think of a show in more dire need of rewriting and streamlining.

The earliest part of the show, the first season, was clearly making things up as it went along, things being much more dramatic than functional. Soon enough, it delved into an overarching plot that left almost everything from the first season behind. Then it extended that plot long enough to chronicle a small war between the reapers and a traitor who rallied their enemies. It ends with a sacrifice on Ichigo’s part, which they then immediately undo in the show’s final season, and leave things there, just shy of the final arc of the manga. As all of this occurred, there was often a sense that things were happening “just because.” The plot of having to go rescue a girl after she was kidnapped and whisked away to an otherworldly stronghold was used at least twice. The villain’s role, and power, were very overdone. Also, Ichigo is apparently a motley of every kind of creature mentioned. And did they have to resort to entire filler seasons? I mean, it covers little enough ground already, especially for being so long.

Then there’s the world-building, which seems to be made up as they went along, from start to finish. We have an afterlife where people are still born, live, and die, and even those human spirits which are brought into the Soul Society, as it’s called, are basically just living a life where they don’t age and can never find their previous loved ones. Any soul which does not make it to the Soul Society goes to Hueco Mundo…

ADD moment: super props for how the author managed to incorporate Japanese and Spanish so perfectly.

…so,  they go to Hueco Mundo, where they are all monsters, and they fight forever, and congeal into massive monsters, which fight and devour each other, becoming more developed monsters, until they eventually become beast-like lords of death and destruction. Good or bad doesn’t matter, that’s what the afterlife holds for everyone: either an ongoing existence in Soul Society, a hellish existence that annihilates you in Hueco Mundo, or one is either devoured entirely by the monsters of Hueco Mundo, if not simply destroyed outright, ceasing to exist, by a breed of ghost-killing humans.

There are very few imagined afterlives which are more horrific than this one, I think. 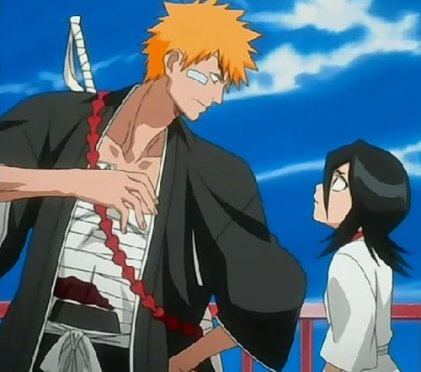 “You ever get the feeling that our afterlives suck?”

Now, dealing with spirits of the dead and such, the reapers are sent forth to slay monsters, thus retrieving the souls which became those monsters, and sending them to the Soul Society (or Hell, depending, because apparently that exists, too, though it’s barely mentioned). So, the entire enemy force of monsters which is led against them can pretty much be chalked up to their failures, on a massive scale. But that’s never mentioned.

Indeed, things are either mentioned and forgotten, or dwelled on forever, but the ramifications of nearly every aspect of this world are almost never elaborated on. Things are the way they are just because that’s the way they are.

I say again, the selling points for Bleach are the entertaining fights, the lovable characters, and the music. Not so much the overall story or the world it’s set in. And with so much attention and loving detail going into what was good, it’s a shame that whatever could have been better, wasn’t.

And this is why artists and storytellers are partners more often than they’re the same person.

That said, I still enjoy Bleach tremendously, especially, like most fans, during the arc where Ichigo and his friends invade the Soul Society in order to rescue Rukia. That is absolutely the best part of the show. The rest isn’t “bad,” but it could have been so much better… and so much shorter.

This entry was posted in Anime and Cartoons, Tuesday Review and tagged Bleach. Bookmark the permalink.