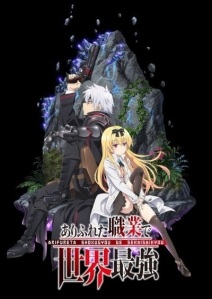 It’s an isekai anime that doesn’t even bother to begin it’s story in our world. It has fantasy, action, adventure, a harem, dragons, vampires, alchemy, shadowy conspiracies, betrayal, demons, a goddess, and so much more… and yet it is so very, very, very BORING.

Seriously, I began watching Arifureta just as a matter of course, but soon I was utterly fascinated at how it could really, truly manage to take such epic, fantastical ideas and somehow make it so entirely dull anyway. That’s the only reason I kept watching it to the end of its first season, and I’ll probably watch its second season as well, just to continue examining how it stays so bland.

The story mostly follows Hajime Nagano. He and his entire class were apparently called to this fantasy world to be its heroes, to clear the labyrinthine dungeons of monsters and defeat the demons who command said monsters. It’s the usual “protect humanity in the name of our god” thing. (Minor note: they did not make it very clear early on that the teacher helping them is a goddess of the harvest or something like that.) Between them, Hajime and his classmates fill out most of the typical stereotypes: a knight in shining armor, a healer, a cleric, a ninja, etc.

Hajime himself is an alchemist, or “synergist” or something like that. He is the weakest of them all, and deemed to be completely useless in a fight (I guess they’ve never heard of Fullmetal Alchemist). Plus he’s not all that eager to be in a fight in the first place, so he’s the tamest of them all, too. Still, he will be responsible for developing and making everyone else’s weapons, so he goes to get a bit of practical experience, to understand what works best for the people doing the actual fighting. But when things go horribly, horribly wrong, Hajime leaps into the fray, saving his comrades with a little ingenuity (gee, imagine that), but then he is betrayed (for some reason…?) and cast into the abyss below, assumed by most to be dead… but he survives.

Hajime survives, partially by luck, partially by wit, and partially by sheer force of will. He survives a hellish experience, and fights his way forward, taking everything the dungeon has to offer and increasing his strength until he becomes truly powerful. And the more he advances through the story, the clearer it becomes that he is a long-awaited killer of gods, capable of liberating the world from the whimsical tyranny of the supreme being behind it all. (not that he actually cares about that, he just wants to go home)

Sounds pretty exciting, right? Well, in a way, it is. But the actual telling of the story was a bit bungled. We were dropped right into the situation without any background, we saw Hajime betrayed without any real investment in his character, and every time things started to get thrilling, we kept flashing to his classmates, who we also did not have any investment in. Add to that the truly terrible CGI, made even worse for how it clashed with the normal animation, and this one barely scraped through my one-episode rule.

Then, we met up with Yue, the first of many girls that will couple up with Hajime. She is a petite vampire, centuries old, and special in a few ways that made it so, when she was betrayed and her throne usurped, she wasn’t just killed, she was sealed inside the dungeon. Thing is, however special she is, for her now-extinct kind, it doesn’t really come into play. She has these abilities, and they aren’t really explored or utilized effectively at all. In fact, her very character isn’t really explored, developed, or even utilized as part of the story. And that is the recurring problem here. 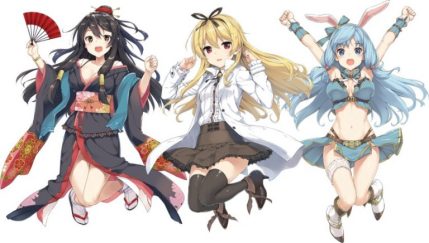 The things that happen, just happen. The characters are what they are, and that’s it.

Hajime goes through the dungeon, getting stronger and stronger, until he has become the strongest warrior in the world, with a wide and diverse array of talents, skills, and weapons, not to mention what is usually a compelling story to motivate him. But it’s all kind of just there. In combat, he almost always just points his gun and automatically kills whatever he’s shooting at. Most of his array of skills becomes mere window dressing, leaving the fighting, which could have been exciting, feeling rather dull and lackluster. His coupling with Yue, and all the other girls, is exactly the same, such that the girls themselves just become animated props, defined by little more than their romantic interest in him. Even the betrayal, which compels him to release and defend Yue, is never fully resolved. He comes to just not care about it, or anyone or anything else. Even when he comes face to face with his betrayer in the first season finale, a man who can be presumed to be a continuing, active danger to his unsuspecting classmates, he does nothing, not for revenge, or justice, or his own personal score, or even – most unsettling – for the safety of those around him.

Hajime just wants what he wants, to go back to his world with his girls in tow, and doesn’t care about anything else, except whoever or whatever he has to kill to get it out of his way.

I know stoic, uncaring bad boys are all the rage, but I could not feel invested in such a flat, bland, apathetic character, especially when his victories were always so easy, so guaranteed, from the instant he got on his feet.

There was no wit, no will, very little in terms of physical effort, and not even the annoying “power of friendship or love or whatever” trope. There were plenty of fireworks, but it was all flash and no substance. In all of the trials and battles, in the expansion of the harem of girls who love him, and even in the impromptu “adoption” of a little mermaid girl, there was nothing, either emotional, intellectual, or even just hilarious, to grasp my attention or entrance me… except for the absolute and astounding lack of anything riveting. 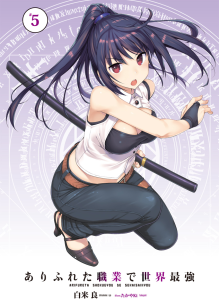 Far and away the best part of the show was Shizuku, the girl with a katana. She was pretty much the only character in the entire show who was actually a character, instead of a prop.  She actually gained my respect for her compassion, her courage, and her grounded sensibilities. Her relationship with Hajime, as platonic as it is at first, and as little screen time as it got, was actually enjoyable, because they were actually allowed to be people, instead of props. I could actually imagine it developing into a real, healthy relationship.

Now, what does it say that best part of the story, namely the only genuine relationship between actual characters in the entire show, was so brief, so small, and only came and went in a flash in the final episode of its first season? I know they’ll continue with it in the second, but, still! I take a look at Hajime and can’t help but think that Shizuku deserves so much better than him, and, for that matter, so much better than the story her character is trapped in.

I say again: it is morbidly fascinating how they managed to have so many fantasy elements that are usually entertaining, and yet crafted a story that was supremely boring. And the reason can be summed up in one sentence:

Hajime goes from being the tamest of his peers, to just being such a terribly lame person.

I’ll keep Arifureta in my memory as an object lesson of what not to do, and as a profound proof of a lesson that much of the entertainment industry seems to have forgotten, or never realized in the first place: it isn’t the tropes the sell the story, it’s the story that sells the tropes.

This entry was posted in Anime and Cartoons, Tuesday Review and tagged Arifureta. Bookmark the permalink.