We send our people to war, and our soldiers into the Hell of battle. We strive to win, to defeat the enemy, and we often resort to unsavory methods. We win, maybe, but what happens after? What happens to the soldiers? How are they repaid for their sacrifice? Are they the same person they once were when they return, or does someone else come back? Does the monster they became on the battlefield stay there, left behind, or does a bit of that monster come back with them?

These are weighty questions, with dire implications, and the story of To the Abandoned Sacred Beasts explores that in a wash of blood, loss, and tragedy, as if searching for that tiniest glimmer of hope and humanity within the horror of it all.

The setting draws quite obviously from the time of America’s Civil War. A northern Union, a southern Confederacy, a western frontier, cannons, rifles, revolvers, etc. There’s a bit of mad science thrown in, which provides the framework on which the story is built.

Said story follows Hank Henriette, a man who bears a terrible burden, alongside a girl, Nancy Schaal Bancroft, who is attempting to understand the “why” behind a tragic situation, and the unfolding drama of multiple factions with their many ideals colliding in bloody confrontation.

Hank, was the captain of a very unique and dangerous battalion, among which was Schaal’s father. They were not truly soldiers, most of them, but civilians drawn from every corner of their nation. They consented to not only join the army, but to undergo something involving mad science and possibly something mystical, a rather grueling experience which literally turned them into monsters of legend and myth. Specifically, each of them is now a different legendary creature, such as a dragon, a hydra, a gargoyle, a siren, or, in Hank’s case, a wolfman. They’re called Incarnates. Each of them is very dangerous, and they were truly fearsome as a unit on the battlefield.

“We are your worst nightmates! All of them!”

It’s easy to see why the people in charge thought this was a good idea at the time, but there is a severe, unexpected cost to this. Though the “why” has not been explained as of yet (I am hoping for a second season to shed some light on this), it would seem that every one of the Incarnates is doomed to eventually go insane, their humanity overtaken by the Beasts they become, putting everyone in their path in great danger. There is no known method to prevent this, and the damage these Incarnates will do when they become Beasts is incalculable. They could well prove even more dangerous and devastating than the war itself, with mountains upon mountains of corpses left in their wake, and no distinction made between the innocent and the guilty.

The decision is made that the Incarnates must be killed before that happens, while they are still human.

They came from all walks of life, many of them having no place in a war, and no business on a battlefield. They allowed themselves to be experimented on, and turned into something other than human, an outward representation of what happens to soldiers in battle. They forfeited the normal lives they once knew. And for all of that, they are repaid with death, in the name of protecting the people they themselves fought so hard and endured so much to protect.

That is a terrible way for the Incarnates to be repaid, of course. Yet, they have seen, for themselves, the truth of it, and how dangerous they are. They’ve already seen it happen, as one of their own went mad and just started killing anyone in his path, and that event inspired an oath: those of them that “lose their humanity,” as they call it, will be put down by their own. It is the Incarnates who bear this burden, after all, so they swear to bear it together, even if they have to kill each other. But things do not go according to plan. 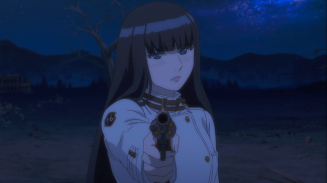 To make this even more heartbreaking and personal, Hank fell in love with one of the mad scientists in question, a woman named Elaine. She is the one to decide that all of them need to be put down like rabid dogs, even before they go insane, and she begins by shooting the man who loves her. Then she means to go with his second in command, Cain, to kill all the rest, but he has already lost his humanity (whether it be through the Beast within, or the war, or just his own lack of character), so he shoots her instead. The next thing that the captain knows, he’s waking up, having been betrayed by his love for the greater good, and having seen his love betrayed and murdered by one they both trusted, and now reports are coming in of the Incarnates going mad and killing people. So, Hank takes it upon himself to fulfill their vow and kill his former comrades, all of them, right down to the last, most especially Cain, the traitor who unleashed them all, and who now has grand designs of destruction and conquest.

What then follows is a none-to-delicate, and none-too-subtle, discussion of what humanity really is and what it truly means to lose it.

It reminds me of something I read in a book once, that the defining characteristic of demons is that they have no inhibitions, no self-control, being governed entirely by their desires. Whether those desires be for wealth, safety, power, justice, or just giving one’s mother a comfortable life, or even just singing a song, each of them grows grossly and wildly out of control, turning people who were once decent into murderers and serial killers.

Even more pointedly, though, is the loss of compassion and respect for human life. That is what makes a monster, and monsters can look very human. For all their brutality and madness, the Incarnates do not resort to using corrosive poison gas on both their enemies and their own soldiers. The humans do. Yet, for all their aggression and betrayal, it is humans who are willing to understand and forgive, which we never saw from the Incarnates. Even the most sane Incarnate was unable to forgive, while even the most stubborn human demonstrated the possibility of doing so.

The story is obviously unfinished after only a dozen episodes, and I hope that they continue it fairly soon. It’s an interesting take on monsters in an unusual setting, as well as a riveting discussion of war, humanity, love, revenge, etc. The animation is pretty good (take note: we do not need to CGI half of a show), and the music… honestly, I don’t remember it, but it certainly never felt dicordant. The fights were largely well-done, though the climactic season finale ought to have done better than going the route of the shounen yell and emotional power up. Pretty much nothing about the show was subtle, but still enjoyable.

All in all, not half bad.

This entry was posted in Anime and Cartoons, Tuesday Review and tagged To the Forgotten Sacred Beasts. Bookmark the permalink.

3 Responses to Anime Review: To the Abandoned Sacred Beasts