The POWER of FRIENDSHIP! …In Real Life

It is the grand finale. The eleventh hour. The moment of destiny.

The hero lies broken and beaten on the ground, as the villain stands over him/her in vile triumph. Despite their best efforts, their most cunning plans, and their exhausting physical struggle… it’s over. They have lost. The bad guy has won. There is nothing left to be done, and so the villain makes to either finish them off, or turn around and walk away without even that final dignity.

But wait! Lo! See that single twitch of the fingers! That much-battered body rises up, one final time, overflowing with a glorious eruption of power! ABSOLUTE POWER! A power that compels even the broken and defeated to rise once more, to strike once more, with a blow so mighty and overwhelming that the villain is, at last, broken in turn, defeated in kind, and utterly annihilated! For the villain knows nothing of such power, or its source! But the hero knows. Oh, yes, the hero knows, as the flashbacks roll and every moment shared with their comrades comes to the fore, filling them with their renewed, unstoppable strength.

It is… the POWER of FRIENDSHIP!

…have I sufficiently described the cliche? 😉

Anyone familiar with anime, or with cartoons in general, has seen this one so many times that it’s gotten laughably old, even when it’s done well, let alone when it’s done in any sort of sub-par fashion. Mostly, we just roll our eyes, turn off our brain for a moment, and enjoy the ride. But, still, one has to wonder, what is the deal with the abundance of this particular trope?

Why is it used so often?

Well, I think I have something of an answer. Put simply: art imitates life.

I submit that the power of friendship is entirely a real thing. Not, perhaps, in the fantastical way of the hero being suddenly supercharged and destroying all evil in his or her path, but, still, real. Even more, it has played a pivotal role in shaping our history, our society, our very civilization. Any force so influential as this must leave an indelible imprint on us, both collectively and individually. We experience it as we grow into adults, and so we pass it on to the children we raise. That’s why we are so receptive to it even in ridiculous, exaggerated, animated format.

So, the question becomes not “why is this idea used so often,” but, rather, “where did the idea come from?”

To answer that, let us turn back the clock and the calendar. Back, back, back, thousands of years ago.

Once upon a time…

The world was a much more brutal, unforgiving place. Though humans gathered together, and worked together, for the sake of safety, the primal dangers of the natural world, and the savage dangers of rival humans, made the physical power of hunters and warriors absolutely pivotal to one’s survival. Those who accomplished greater feats of strength and daring were praised, as well they should be, for their skill, strength, and bravery, and the benefits which such brought to their family and neighbors.

Yet, for all that these men worked together, they were also, in the end, each one, on their own. It was every man for himself, every man against the world, and every man surviving by his own effort.

So, when conflicts arose, they were solved with brutal simplicity: the two sides fought until one side had clearly won. That was true for conflicts between individuals, and also for collections, for tribes and villages and kingdoms which warred with one another. Obviously, whoever had more muscle to throw at the problem – more warriors, bigger warriors, fiercer warriors – had a natural advantage.

But as the search for any such advantage developed, civilization began moving beyond the Stone Age, with the use of brass, then iron, then steel, and so forth. And somewhere along the way, the advantage of overwhelming numbers began to dwindle significantly.

Because a horde of individual warriors, each one accustomed to looking out for himself even in battle, met its match in the form of an idea, summed up in a single word:

A collection of warriors who fight as a unit.

The earliest example of this I can think of is the Greek phalanx, being the precursor of the famed legions of Rome. Each man was armed and armored roughly the same, especially with a large spear and a large shield. Not the easiest weaponry to wield, but they trained together in their use. They developed discipline even in the face of horrific demise, and they stood, shoulder-to-shoulder against any foe, no matter how fearsome and numerous.

One can only do that for so long, protecting a comrade instead of oneself, before the idea of comradeship itself arises, and binds a unit together. Whatever disagreements arise, whatever flaws in two men would rub each other wrong, and whatever rogue elements might arise within the unit, they still protect each other instead of themselves.

That is a powerful thing, is it not?

Greece prospered immensely, becoming rich and wise and powerful, even overturning the reigning superpowers of the day, because its warriors fought together. Alexander the Great defeated armies much larger than his because he used that unity effectively, including when he led his men to charge an opposing king, who, looking out for himself as much as possible, turned and ran, leaving his army behind to surrender. When Rome developed that idea into the legions, they became so formidable that vast hordes which far outnumbered them would sometimes just turn and run away instead of fighting. A Roman citizen was able to walk the world without fear, because the legions of Rome had his back.

And within Greece, and, later, Rome, were born the ideas which would come to shape Western Civilization. Many of those ideas would be evolve, much as the legion evolved from the phalanx, but would have their roots in these ancient civilizations which came to exist, let alone came to such prominence, partially because of the idea of comradeship.

Or, rather, the power of friendship! 😉

No, it’s not some fantastic swelling of indescribable power. It’s a choice, a selflessness that makes the whole, the unit, more than just the sum of its individual parts. It has played its part throughout our history. When soldiers fought together, when scholars made groundbreaking discoveries together, when craftsmen worked together, when sailors sailed together and gave us a particular reference for the fate of traitors, for those who betray that human connection.

When a certain Jew taught a people, still learning this idea, “Greater love hath no man than this, that a man should lay down his life for his friends.”

When ordinary people of Medieval Europe began to glow with patriotic loyalty to their own nation, as much as to their own family.

When British redcoats marched as one into enemy fire, or used their own bodies to make a fort… and when some uppity colonists waited to fire, as one, until they saw the whites of their eyes.

When the Greatest Generation brought a growing empire in the Pacific to its knees. And when the defeated nation stood up again. 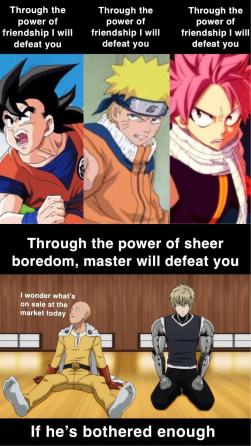 For that matter, Japan has long had a culture of duty, of self-sacrifice for the greater good. I do not know the roots of their duty-bound culture, as I am much more familiar with Western than Eastern history. But I know that it has played a resounding part in Japan’s ability to rebuff its enemies, some of them very large, very powerful, and very smart. Much of why Americans, and their allies, once had to fight so hard against the Japanese, I think, was because both sides were well-matched in their devotion to their respective country, and to their comrades.

So, naturally, when the fighting was over, the Eastern and Western versions of the ideal began to mix together. It’s had a number of decades to do so, and I am fairly certain that is the reason we have the much-tolerated cliche of “The Power of Friendship!”

Because the best parts of two great and ancient traditions, praising the selfless choice to protect a friend instead of oneself, have resonated with one another, and thus with the audience found on both sides of the world.

…but that’s just my own little theory. 😉

This entry was posted in Discussion, Miscellaneous. Bookmark the permalink.