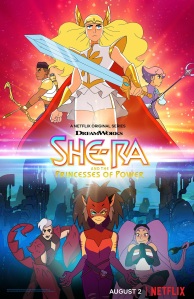 I never thought that, of all possible titles, Netflix’s She-Ra and the Princesses of Power would ever go on my list of shows to watch. And then came YouTube, with all the clips to be found thereon. Considering that is what got me into Girl Meets World, Game of Thrones, and The Vampire Diaries, got me interested in watching Angel and rewatching Buffy the Vampire Slayer, and even got me to try Pretty Little Liars, I think I am beginning to sense a pattern, here. Either way, I gave it a try.

Which turned into bingeing the entire show within one weekend. (albeit a three-day weekend)

I am secure enough in my masculinity and maturity that I can admit, I liked it. In truth, I was a bit surprised by how much I enjoyed it, as shows which are obviously intended especially for kids/girls can often turn into mind-numbing slogs for an adult man, but, then again, that can be said for most any genre, with almost any intended audience, can’t it?

Still, I have paused to ask myself, why? What is it about She-Ra which I enjoyed so much?

Well, let’s get a clear picture of what we’ve got here, starting with the premise.

She-Ra is a reboot of the 1980’s cartoon, She-Ra: Princess of Power, which was a girl-oriented spin-off version of the boy-oriented He-Man and the Masters of the Universe. As He-Man got rebooted back in the early 2000’s, and rebooting classics is an ongoing pattern of late, as with the likes of ThunderCats and Voltron, perhaps it was just a matter of time before they got around to She-Ra, too.

The plot of this reboot follows Adora, a young woman who was raised by the nefarious Horde, in which she is a rising star until a fateful moment where she is chosen to inherit the mantle of an ancient, powerful princess, She-Ra. The encounter opens her eyes to the lies the Horde has told her, and she turns against them, leaving her old life, and her old friends, behind. Now, alongside her new friends, such as the warrior Bow, Princess Glimmer, and other princesses who wield elemental magics (thus, “the princesses of power”), she fights to protect the innocent people of Etheria from the Horde’s continual onslaught. On the other side, the forces of the sinister Hordack, the power-hungry Shadow-Weaver, and the rising leadership of Catra, formerly Adora’s closest friend, seem to be nigh-unstoppable at times. And that’s only the beginning.

Throughout the four dozen or so episodes, there are moral lessons learned, numerous personal journeys undertaken, and overarching conflicts and narratives which must be questioned (Adora, especially, must do this several times). A number of interpersonal bonds, several of them surprising, all of them endearing, are formed, tested, and changed. Colorful, lovable characters, epic conflicts, cosmic powers, and deep themes of freedom, order, growth, and love are all on display, backed by fluid, pleasing animation, excellent voice work, and beautiful music.

So, it’s not simply one thing, but many things, which fascinated me about this series and made it so enjoyable. Most of all, however, it has to be the characters, and how they are the ones driving the plot (instead of the other way around), with all its disparate parts, which all come back together in the end. It’s pretty masterful, and riveting as we see the many highs and lows of all these heroes and villains, including how heroes can skirt the line of villainy, and how villains can sometimes become heroic. 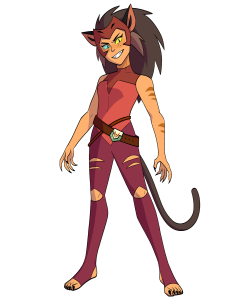 In the latter case, there are essays (and other posts) which can be written about the villains of She-Ra, most especially Catra. She rises from nothing to become a dominant power in the world, triumphant one moment, then left utterly bereft by nothing more than the truth of herself and the loss of everything else, until she finally makes one good, honest choice. There are some obvious parallels between her and Zuko from Avatar: The Last Airbender, as well as other redeemed villains and antagonists. That’s really where Catra’s arch feels a little forced. I mean, there’s a moment where she basically goes nuts, stabs a friend in the back, and very nearly succeeds in destroying the world. After something like that, her redemption feels… perhaps a little too easy? Like, it’s simply there, it just happens, she doesn’t earn it, and her place among Adora’s friends, the way Zuko does, and there are no ill effects or lasting ill feelings.

It’s perfectly normal, do not question it.

Which actually leads me into a subject over which I am having to wrestle with myself, and it requires a bit of explanation.

See, “normal,” as I have seen it, is the one thing in all of mankind’s world which is most difficult to oppose, the most dangerous to challenge, and the most heretical to question. All throughout our history, and throughout the world today, we have all sorts of examples of widespread practices and behaviors which anyone looking in from the outside would call insane, even abhorrent, but which are simply “normal” within that society. They are part of the established pattern of life and living, and things are the way they are simply because that is the way they are. There might be some rhetoric attached to it, but there’s no real discussion about it. It’s simply normal, and changing anything that is “normal” comes with great effort, cost, and risk, because how dare anyone rock the boat.

So, when I see a children’s show portraying same-sex relationships as “normal,” without any discussion of what it means, of what the consequences and potential consequences are, heck, without even any apparent distinction between same-sex and heterosexual relationships… well, it leaves me conflicted.

Not only does it teach our children that such is normal, but that there is nothing else to consider, that there is no other side to the issue. There’s one couple referred to in passing, one that’s shown as perfectly loving and lasting, another that has two men who somehow have thirteen sons (did they breed with women, learn to clone themselves, or adopt a bunch of orphans made by the ongoing war?), and, finally, the coupling that comes almost out of nowhere to decide the fate of the universe at the climax of the story. And for being so present, and apparently so important, nobody talks about. At all.

I have far less issue with there being same-sex relationships, even in a kid’s show (that is a slightly different discussion to have), than I have with how there is no discussion about it whatsoever. It is simply… normal. And therefore should not be questioned.

It’s particularly ironic for the show to treat such a sensitive, important subject in such a one-sided manner when it repeatedly demonstrates that the narratives presented by those in power are often questionable and self-serving, that there is another side which must be discovered. That is true with the narrative the Horde raised Adora on, and with the story that Adora is told about the previous She-Ra. It’s especially true of the self-aggrandizing rhetoric presented to the entire universe by a mad, ravenously power-hungry entity which spouts off about “peace” all the time, while he lays waste to worlds throughout the stars, enslaving minds and destroying everything which does not conform to him. Meanwhile, the heroes were all about freedom, individuality, and even embracing things that others would call faults or flaws. I just wish that, having featured several same-sex couples, they could have bothered to discuss it. 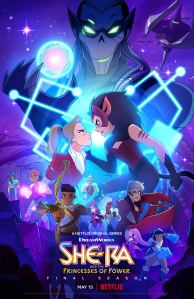 That, obviously, is my primary conflict with the show. Outside that, it’s a few small things, which, as kooky as they are, are just “normal.” Like how they never explain why She-Ra’s power is activated with “for the honor of Grayskull!” Or how/why Entrapta’s hair is prehensile. And, of course, it is obviously a relic of the original 80’s cartoon that nearly every girl’s name ends with “A.” Adora, Catra, Entrapta, Scorpia, Angella, Castaspella, Netossa, Spinerella, Huntara, Perfuma, Mermista, Frosta, Mara, Flutterina, Octavia… and I’m fairly certain there are a couple more. Sheesh! If not for Glimmer and Shadow-Weaver, I may have gone nuts just for that!

So, it’s not like a “perfect” show or anything. But, all in all, I enjoyed it far more than I expected. I am not certain that I can really recommend it for the kids that it’s obviously intended for, but I generally liked it.

This entry was posted in Anime and Cartoons, Tuesday Review and tagged She-Ra and the Princesses of Power. Bookmark the permalink.