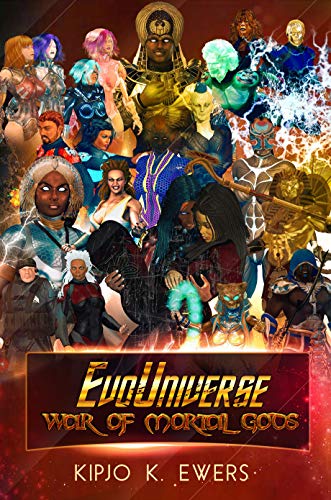 I am just going to get this part out of the way:

It’s “refrain,” not “reframe,” as in “please refrain from doing that.”

I do not know if the author himself managed to get all three of those wrong every single time he wrote them, which was quite often, or if some editor or editing software somewhere is to blame, but, either way, it drove me batty.

On that opening note, I have to say that War of Mortal Gods: Book One rather clearly demonstrates that the quality of Kipjo Ewers’ EVO Universe, consisting of The First, EVO Uprising, Eye of Ra, and Genesis, is quite clearly in decline.

I hate to be so harsh, especially with an author whose work I have so enjoyed. So, let’s back up a bit and put this into context.

One of Ewers’ greatest strengths has always been a writing style that could easily be converted into something visual, especially movies. This time around, however, that very strength seems to have turned against him. Instead of describing things so that they can be vividly visualized by anyone, he uses shortcuts, as if he’s talking to some artist on the project whose job it is to take broad descriptions and come up with detailed appearances. The word “amalgamation” was used a number of times, describing how something looks as if it were a combination of things that human Earthlings might be familiar with. And that was it.

Which, it was also a bit strange to be getting such comparisons whilst seeing things from the perspective of aliens who had no such familiarity with Earth. We got Earth-based amalgamations, but without any idea of what the aliens thought or felt about what they were seeing. If, instead, we truly saw through their eyes, saw what they felt seeing their own planet, that would be something else entirely. Do they see strength? Decay? A shell? A gilded flower with veiled power? But we got nothing of that. It was just… vague instructions for someone else who had the responsibility making things visible.

For that matter, I have also enjoyed how easy it was for us, the audience, to connect with the various heroes, so powerful but also so human. We got to spend time seeing them be human. At least, we got that in previous novels. In War of Mortal Gods, most of the time was spent being dramatic instead. Very little actually happened outside some oh-so-epic thumb-twiddling. The heroes basically just waited, or flailed around a bit, before all Hell broke loose at the cliffhanger, while the villains plotted and plotted and plotted and PLOTTED until the moment they finally made their move. Seriously, we did not need so many chapters establishing how evil and savage the villains are, and much more graphically (and uncomfortably) than we were shown in previous novels. With so much being made to happen, and so little actually happening, there was something of a disconnect with the characters in general.

But perhaps the overall problem could be summed up more succinctly: War of Mortal Gods is just in dire, severe, overwhelming need of editing. The timeline of it, and Genesis, needs a bit of work, but most of all, the overall plot of this war needs to be streamlined, with things actually happening, instead of being promised to happen, and with the characters developing, instead of simply going through the various obstacles in their way. I can see how this is only the first quarter of the saga – or, rather, the second part of the saga, as it picks up directly after Genesis ends – but I can also see this novel having been heavily edited to about a quarter, or maybe a third, of its length, making room for the rest of the saga to be included in the same novel.

I won’t advise Ewers to go back to the drawing board, as that ship has now set sail, but he may want to vigorously reassess how he is managing his story.

This entry was posted in Books, Tuesday Review and tagged Kipjo Ewers, The First, War of Mortal Gods. Bookmark the permalink.