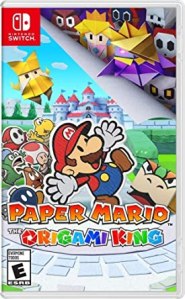 I had no idea what to expect from Paper Mario: The Origami King. It turns out, I should have expected one of the best and most compelling Mario games I have ever played, and probably ever will play.

I was unfamiliar with this or any previous Paper Mario games, so my first question was how Mario gets turned into paper. As it happens, it’s set in a Mario world where everything and everyone already is paper. From there, the creativity behind this game is on continual, shining display, creating a gameplay that is interesting, unique, and believable within the confines of this paper world. The use of origami and paper mache, contrasting 3D with 2D characters, was especially imaginative.

The premise of the story is, as per usual, Mario needs to save Princess Peach and the Mushroom Kingdom, traveling through the various realms and beating various foes in order to do so. However, the first twist – after making everything paper, that is – is that the enemy is not Bowser. No, the enemy this time is King Olly, the titular Origami King, and he is surprisingly powerful. His rampage quickly damages all of the realms, and his ambitions and activities prove him to be an enemy, and a very real threat, to everyone from Mario and Peach to Bowser himself.

Mario has a lot of work to do, traveling the world, setting things right, rescuing King Olly’s many victims, defeating his minions, and repairing the world itself, which has been torn up so badly that there are literal holes in it. Joining him is the Princess Olivia, Olly’s sister and his intended queen, who refuses to stand by and let her brother’s mad, destructive schemes play out. Mario does most of the work, but Olivia, in addition to providing guidance, humor, and tremendous heart, can transform her origami body in various ways, gaining access to great power at times of great need. And she’s not Mario’s only helper! No, as he is walking the world, facing down enemy origami troops, fighting paper mache giants, defeating the elemental “vellumentals” of earth, water, fire, and ice, matching wits against the tactics and devastating attacks of various enemies based on the tools used in making origami – colored pencils, staplers, scissors, etc. – and repairing the world itself of all the damage Olly has done… well, he’s going to need all the help he can get! 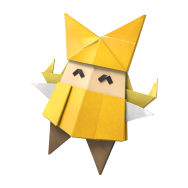 This is where the narrative really starts coming into play. Most Mario games, in my experience, don’t really have much of a story, per se, but this one definitely does. It starts out the way most Mario games do, with the “go here” and “do this” and such, but it’s all the characters that Mario interacts with which really drive the story. There’s Olivia, of course, driven to stop her own brother, and conflicted about the necessity of it. And there’s Mario’s brother, Luigi, who pops up to help. But as each new realm introduces us to new friends and allies, we explore more of the world and grow attached. Best of all, in my opinion, is the new depth that is given to Bowser and his minions.

It starts off in small, surprisingly potent ways. Meeting a few minions who are actually nice, until they get turned into origami soldiers and enslaved. Bowser is reduced to a helpless state for most of the game, and his personality shines through as he fights on anyway to try and save his underlings.

Then we meet a Bob-omb in search of his lost memories. While he’s partially a comic relief character, we enjoy him and his personal journey so much that when he selflessly, and without hesitation, sacrifices himself for his new friends… well, it’s a heart-breaking loss, and one that Mario and Olivia themselves need to work past in order to continue on with their world-saving quest.

We meet and work with a few of Bowser’s more notable underlings, including Bowser Jr. and Kamek the sorcerer. We see many of his minions brought low in many ways, but they rise up to fight alongside Mario in an all-out battle, and we have to save them all a few times. By the time we reach the all-out assault on the enemy’s castle, and the final confrontation with our mutual enemy, it feels perfectly natural – no, it feels outright thrilling – to fight in an alliance with Bowser’s forces, whom we have come to know and feel for in a very short amount of time.

King Olly’s best work is uniting his enemies against him.

And then, at the last, the final sacrifice which is made to repair the world, and save everyone… well, it is magical. The victory is well-earned, and the joy well-founded, though the sorrow which tinges it is also genuine.

In short: it’s a really good story in a vivid, unique world. And the soundtrack is phenomenal!

I do have one small qualm: the new battle system may have been unique and fun, but it got a bit tiring pretty quickly. The idea is that the enemies are placed on this circle around Mario, and we can rotate or slide sections of this circle to ideally place them for maximum effect when we attack them, either by jumping on them or hitting them with a hammer. However, one can only move the pieces so many times, and there’s a time limit. I can understand the why of that, but it was infuriating to try and solve these puzzles with such limits on both time and the number of moves one can make. Even more annoying was how it happened every single time an enemy made contact with Mario, wearing down our health and his weapons! (seriously, the one thing I hate most about Breath of the Wild is how the weapons all deteriorate and break, and Origami King didn’t even have the weapons last very long)

Still, even that is somewhat balanced. The battles might have been wearying and frustrating, but the rewards for winning a battle were greater than beating an enemy in an ambush (which sometimes avoids the battle). The boss battles inverted things with the enemy in the center and Mario having to arrange the circles such that he could get the items on the circles, avoid the traps, attack, and survive, and I would be lying if I tried to say I didn’t enjoy the challenge. And, ultimately, the minion battles prepared us for the boss battles, which prepared us for the final battle. So, everything served its purpose.

And as much as I hated replacing the weapons which broke, I very much enjoyed getting new, higher-level weapons as the game progressed. 🙂

So, all in all, with the pros and cons of the battle system, combined with the music, the unique animation, and especially the stories and characters… well, it’s one of the best and most compelling Mario games I’ve ever played and ever will play. 🙂 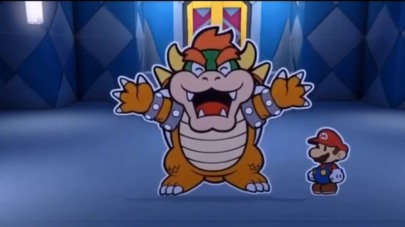 “THIS IS SUCH A GREAT GAME!”

This entry was posted in Games, Tuesday Review and tagged Paper Mario: The Origami King. Bookmark the permalink.