An Inheritance of Ashes 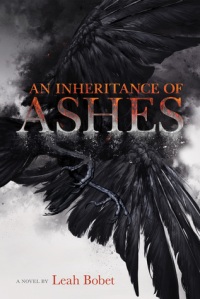 It’s a poetic title that turns out to be literal.

An Inheritance of Ashes, by Leah Bobet, follows the story of a sixteen-year-old girl, Hallie. After some sort of apocalyptic event in which mankind’s modern cities all fell (for reasons left unexplained), Hallie’s family has kept a sizable farm for at least three generations. In addition to the farm, Hallie and her sister inherited from their abusive father a number of grudges, feuds, tempers, and an apparent inability to communicate properly unless driven by extremes. If dealing with themselves, each other, and their rural community wasn’t enough as they struggle to keep their farm and survive the oncoming winter, the fallout of a desperate war in the south against some kind of evil god and its followers – a war which has scarred and lamed one the young men who is a neighbor to them and has apparently claimed the life of Hallie’s brother-in-law shortly before the birth of her sister’s child – seems to bring the entire world down against them.

And yet it may well be Hallie herself, the choices she makes, the risks she takes, and the desperate secrets she foolishly chooses to keep, which pose the greatest danger of all. Not that she doesn’t have her reasons, and fairly good ones from her perspective, for what she does. However, in a time when any choice made can bring demons and armies straight to one’s doorstep, the will of a teenage girl can be dangerous indeed.

The story which unfolds is one of hope in hopeless times. Such hope is found not in the towering figures of heroes and villains who are larger than life, but in the humble, everyday virtues which we so often underestimate. It takes courage and determination to hold onto those few things which matter most, no matter the unending ordeals involved. Family, charity, forgiveness, these are mighty things, but they require a form of open, honest communication that sets aside pride and fear. People’s vision of all these things, and each other, can be so easily clouded, not least because everyone wants to be right, and not have to accept when they have been wrong. Which, people often are, as not many things are exactly as they think them to be, with their limited perspectives. Yet, as everyone muddles there way through the relentless despair of the world, there may yet be hope for their salvation, and perhaps gaining, or even regaining, a few precious things along the way.

These are very heavy, significant themes, but the way they play out is incredibly grounded and realistic. And it’s rather refreshing, in an era where almost every story is about either saving the world and/or coupling up, to see a story that tackles something as relatable, and yet still overwhelming, as simply keeping one’s home, life, and family intact. It’s the pressure of the real world brought to life on the page, and Leah Bobet accomplishes this with exquisite detail and imagination.

That last does actually leave a few things to be desired, at least as the story works towards the climax, and all hell breaks loose, and the narrative suddenly skips forward by several hours or most of a day. There’s a slight loss of weight, of force, behind the impact of a crisis when we skip over such dire moments. It makes me wonder if Bobet felt it would have been distracting – I disagree, but I’m not the published author, here – or if it’s simply not her strong suit. There wasn’t much violence described in the book at all, most all of it happening off-screen, so to speak.

I was also a bit disappointed in how we never learned what it was that made all of humanity’s cities fall into ruin. Or why there were apparently little pockets of reality tearing open between alternate dimensions, alternate worlds. Or if the two were somehow related. But I suppose those were actually immaterial to the story itself. Those would have been about the setting, instead of about the story and the people in it.

Oh, and about that title, which was poetic and literal? Heh, it goes into spoilers, but suffice to say it doesn’t refer only to a farm or a legacy that two girls inherited from their father. It is related to a custom in this world, of burning the corpse of a fallen soldier and delivering the ashes to their loved ones. This entire story is about how Hallie comes into the possession of some ashes which she intends to deliver to someone else.

And it is a riveting story, filled with sincere emotion, real-world concerns, and themes which give the story significant meaning.

It is very well-written, well-crafted, and well-told. I have very little but praise for An Inheritance of Ashes.

This entry was posted in Books, Tuesday Review and tagged An Inheritance of Ashes, Leah Bobet. Bookmark the permalink.