A Few Wholesome Anime. No, Really!

Three descriptors I love to hear about or apply to my entertainment. Thus, I am greatly saddened as I find that there seems to be a vast dearth of anime (and other stories) to which they can be safely applied.

I love anime, and movies, and books, and stories in general. Good stories. Quality stories. Stories that teach and uplift and generally just leave us as slightly better than we were before.

Yet, as much as I love it all, I can’t help but be constantly frustrated by how so many our stories, anime and otherwise, have become something other than entirely wholesome.

It’s not uncommon or entirely inappropriate, I think, for an anime to include violence. But there are levels of bloodshed and gore, of horrific deaths and graphically-depicted torture, which are shocking to behold.

There is explicit nudity and uncensored sexual content. As much as I can appreciate the female form (and even the male form, in some cases), and as much as I can enjoy love stories and scenes of affection, there is a line somewhere that ought not to be crossed. It makes me especially uncomfortable when inappropriate behaviors like groping, sexual molestation, and rape are depicted so blatantly, not to mention frequently, and as if these were perfectly normal behaviors.

Even relatively tame anime, concerning love stories, comedy, and such, are rife with the prevalent tropes of panty shots, bathing and bathroom scenes, coarse, suggestive language, and other ways in which people, especially young girls, are highly sexualized. Even in anime which otherwise would seem to be geared more towards children, which is just disturbing to realize.

And then there’s how anime is rightly famous for its unnerving scenes, psychotic characters, disturbing topics, and mature themes.

Now, I want to be clear: I am not saying that all anime or other entertainment must be squeaky clean and devoid of anything which might offend someone. For one thing, it would be completely useless to attempt such. Haters gonna hate, and all that. For another, it is no one’s right to determine what sort of content does or does not get made or viewed, though one should always have the opportunity to be informed about whatever content one can find in any given product. Finally, if we were to make everything in anime all happy-go-lucky and whatnot – assuming we could – I believe humanity would be the poorer for it, if we stopped talking about difficult subjects.

But I have to admit… it is such a breath of fresh air when I get to see something that lacks all the filth of the world and is, quite plainly and simply, wholesome. When it tells a good, relevant story, free from all the blood, sex, and other “mature” content which is so common these days, I call that amazing and praiseworthy. Particularly when it’s not strictly a “kids” show.

In honor of that, I present, in no particular order, a few anime I’ve seen and enjoyed at least partially because of how wholesome they are.

Kids on the Slope

After a chance meeting on the roof of a school in Japan, a young man is introduced to Jazz music and comes to love it as he plays it with his new friend. This coming-of-age story follows these boys and their friends as they experience love, loss, hope, joy, laughter, tears, and tragedy. These are the experiences that turn them from youths into adults, living their best lives according to their own terms. And, as a bonus, the soundtrack is beautiful! 😉

Sleepy Princess in the Demon Castle 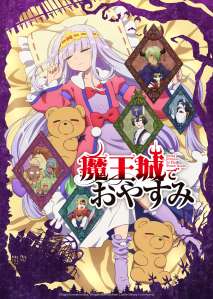 We all know the story of the hero challenging the lord of demons to rescue a kidnapped princess, but what is the princess doing while waiting to be rescued? Sleep, apparently. A lot. By any means necessary. At any cost. And it is hilarious to behold!

By the Grace of the Gods 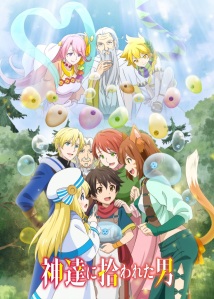 It is now a well-worn trope in anime for people to be taken to a fantasy world, often by death and reincarnation. Most such stories feature the protagonist having to fight against and defeat the lord of evil and his minions, but not this one! No, this is just a man who died getting a chance to live a happy, peaceful life in another world. And his story is one of those that makes you feel like you’re glowing inside, all warm and happy!

After making a terrible mistake, a young dragon gets kicked out into the world, and now he needs to find a place to live. He gets some unexpected help, but he certainly needs it, because all of things that dragons are famous for being – fierce, fearless, strong, powerful, deadly, dangerous, etc. – this dragon certainly is not! His hunt proves to be long, because every possible home comes with dangerous complications, but it is hilarious to watch, and heart-warming as he matures through the extended ordeal of searching for a dragon-friendly home in a fantasy world.

After an inexcusable outburst, a calligrapher is sent to live in a remote town on an island, theoretically to do his work in peace and quiet while he gets his act together. The “peace” part is debatable, but he definitely does not get much “quiet” after he meets a little girl, the village scamp. She and the other townsfolk enliven this man’s life in ways he did not expect, and not only does he come to mature a bit through his experiences, but he also finds a renewed love for his own art.

A young girl, recently bereft of her mother, is taken in by the mysterious, illustrious Sohma family. They are good people, generally, but, as the girl literally stumbles into discovering, they live under a curse that turns them into the animals of the Chinese Zodiac whenever they are hugged or held by a member of the opposite gender. The antics which follow are hilarious, but are carried on a powerful emotional undercurrent, as the weight of this curse is heart-breaking.

I cannot speak for the redone version that is much closer to the original manga, and is much more focused on romantic relationships. But I absolutely love the older anime! 🙂

Snow White with the Red Hair

A beautiful young woman with red hair flees her homeland for fear of the attentions of a prince, and runs right into a much more charming prince from a neighboring country. He defends her, she supports him, and they eventually fall in love, overcoming all the barriers of class distinction (and several would-be kidnappers) to do so.

Each of these titles made me smile and laugh as I watched them. Some of them made me cry as well, and made me think. But, most of all, each of them was a wonderful breath of fresh air to my soul. They’re meant for more than just kids, but they’re so clean and wholesome that I can’t help but thoroughly appreciate them on a fundamental level. We can tell good stories with important lessons without descending into every form of “mature” content in the world. It’s inspiring!

I only wish there were more!

On which note, my fellow anime fans, are there any other truly wholesome anime out there that you have enjoyed and would recommend? I would love to hear about them! 😀

This entry was posted in Anime and Cartoons, Anime-ted Living, Discussion and tagged Barakamon, By the Grace of the Gods, Dragon Goes House-Hunting, Fruits Basket, Kamitachi, Kids on the Slope, Sleepy Princess in the Demon Castle, Snow White with the Red Hair. Bookmark the permalink.

1 Response to A Few Wholesome Anime. No, Really!