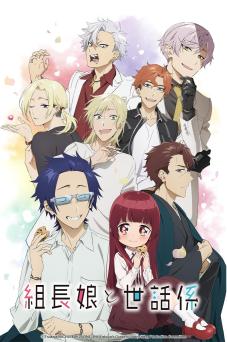 With a title like this, one might expect an overwhelming comedy, maybe something like the anime version of Three Men and a Baby, where hilarious hijinks ensue as the big, tough men have to learn to adapt to the task of raising a child and find their lives forever changed as they all become a family. There is a certain element of that, but The Yakuza’s Guide to Babysitting is mostly about the fun, simple, happy, peaceful moments by which a bond is formed and how that bond begins to reshape both man and child.

A yakuza heavy-hitter is tasked with babysitting the adorable daughter of the family. This is partially to ensure that six-year-old Yaeka is looked after and protected, and partially to teach the former heavy-hitter, Kirishima, to be a bit more responsible and less violent. What follows is a series of endearing episodes wherein the loneliness that both of them feel is driven away as they form connections, strong and deep, with each other and with the people around them. New friends are made, old friends return, they adopt a stray kitten, they visit Yaeka’s mother in the hospital where she has been comatose for several years… that sort of thing. They learn to smile, cry, comfort, and support each other.

There is a certain humor to when Kirishima and his comrades have to balance caring for Yaeka, “the little lady,” and seeing to their duties as yakuza, which mostly involves beating down interlopers who tread on their turf and mistreat those under their protection. Still, I have some reservations about such a positive depiction of organized crime. Sure, they might still be human, and they may well have their own code of honor, but they’re still involved in every bit of shady business that goes down in Japan, much of it violent, bloody, and lethal. They’re not gentle protectors, compassionate overseers, and family men who fall for the girl at the flower shop and raise families like normal, peaceful people. Sure, it might be a bit inconvenient for them to have a loose cannon around, but I doubt the head of a powerful crime family would really mind having a one-man army the likes of Kirishima, who can apparently destroy entire rival families single-handed. Thus, it might make sense to make the man a bodyguard to protect the daughter of the family, but not so much to try and tame and pacify him by making him practically solely responsible for the girl.

As such, fully enjoying this anime somewhat depends on being able to forget that the yakuza are violent, despicable criminals, and not thinking too much about how little Yaeka will one day be a queen of crime, and that’s if things go well, with nothing terrible happening to her.

If one can manage that, then this a cute and heart-warming story about people finding more joy and happiness as they bring out the best in each other. This is even contrasted by the villain lurking in the shadows, pulling puppet strings and leaving devastation in his wake as he works to turn Kirishima back into the demonic person he used to be, by orchestrating a threat to Yaeka. It works, for a short time, because who wouldn’t be infuriated beyond reason towards any who would threaten such an adorable, innocent little girl? But it doesn’t last long. The incident is soon resolved, though the puppeteer escapes for the moment, and everyone is back to smiling and making each other better. 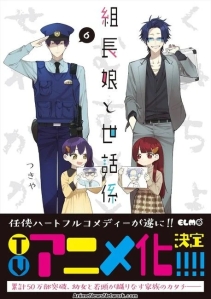 Though, if I may… why did they not get to *this* obvious complication?!

Not that everything is unrealistic, undiluted happiness. I mentioned Yaeka’s mother being in a coma, and the series, or at least the first season, ends without her ever coming out of it. It similarly ends with Kirishima visiting the grave of his parents, who died when he was quite young. But there is abiding hope for Yaeka’s mother, and peace within Kirishima as he talks to the grave. Thus, there is a certain balance between the ingredients of happiness and sorrow, though much more favoring happiness.

Basically, this is a charming little anime for when you want something that you don’t have to think much about, and which carries just enough emotional weight to feel good. It’ll pass a few hours pleasantly enough, with some laughs and some tears, without demanding much in return. And it’s mostly wholesome, too, which is a particular plus these days.

This entry was posted in Anime and Cartoons, Tuesday Review and tagged The Yakuza's Guide to Babysitting. Bookmark the permalink.