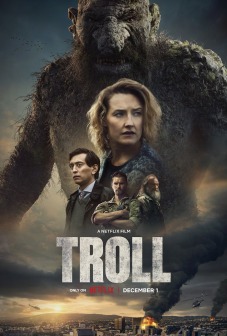 I saw the trailers for Troll, and I was not particularly interested.

My mother, however, was insistent on my seeing it and, being from Norway, she is not the type to be easily dissuaded (a quality she passed on to me and my sisters). I do at least appreciate that she didn’t go around reenacting scenes as she normally does, as that kills my interest pretty fast, but what ultimately sold me was an exchange of promises: I try Troll and she tries Fullmetal Alchemist: Brotherhood. (it is my latest attempt at getting someone in my family to stop looking at me like I’m a childish freak when I talk about anime, via the aid of a very high-quality title) In that light, I was sorely tempted to imitate, in good humor, some of my mother’s qualms with anime, but this movie deserves a more serious take.

Yes, Mother, I admit quite freely, it was good. I liked it. (and I look forward to you making a similar admission one of these days, heheheh) It’s a monster movie, but not the horror movie which the trailers made it look like to me.

Troll follows the unfolding disaster as an ancient creature buried beneath a mountain is roused by the explosions of a human crew digging a tunnel through said mountain. It rises like a walking force of nature, one which the humans have no idea how to deal with. It is far too powerful to be allowed to roam freely, spreading terror with every step, and yet… how does one kill what basically amounts to a walking mountain? And what great sadness drives its unstoppable march?

Foremost among the humans is paleontologist Nora Tidemann. Plucked out of her normal work digging up dinosaur fossils, she is thrust into the heart of humanity’s struggle with the troll, right alongside politicians, aides, generals, and soldiers. She proves to be a key figure, every step of the way, as the Norwegian government scrambles to identify and eliminate the troll. It is a struggle which takes her on a very personal journey, as she represents modern humanity’s struggle with itself, with nature, with science, and with the past.

Nora was raised on the same fairy tales as everyone else, and by a father who truly believed in them much more than most. He instilled in her a predisposition towards acts of faith, but she still had to grow up and live in a modern society, one that grounds itself in science and proven facts, and so she, like most others, let go of those old tales at some point. Thus, faced not only with something remarkable but something out of myth and legend, a thing that their ancestors knew about and which they do not, Nora and most other humans are barely able to function. Heck, for most of the movie, they can’t even refer to it as a troll, just as a creature. They won’t even say its footprints are footprints until they see the thing with their own eyes. 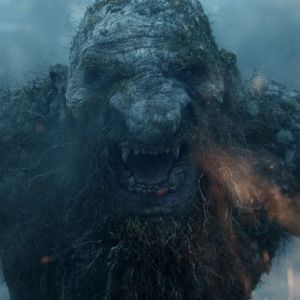 The troll itself is shown to have more than one dimension. It is sad and alone, the last of its kind, all of its family long since dead, and most of the damage it causes is incidental. It’s not some mindless, malicious monster out to destroy humanity. It even deliberately saves a young boy from a falling helicopter. However, it killed a number of people simply by waking up and leaving the darkness under the mountain. It terrorized an elderly couple and their dog out in the countryside, destroying their home simply by passing through. When it smelled human blood, it acted with true malice, snatching up a soldier as he bled and prayed and begged for deliverance, and ate the screaming man whole. Heck, the one man who interacted with it in calm wisdom was killed simply by being in the troll’s proximity. And that’s before its path takes it toward the den of its old home in the heart of Oslo, Norway’s capital city.

No, as sad and tragic as the entire situation is, the troll has to be put down for the safety of humans. But, again, how does one kill a walking MOUNTAIN?!

The answer is found in the stories that predate even the fairy tales, the dark truths which were buried and forgotten as victorious humans watered down their own perception of trolls, turning them into figures of mockery so potent that almost no one today can take the word “troll” seriously, not even when a troll is stepping on their fellow humans. There is a very potent lesson in that, in giving some due heed to the old stories, the knowledge and wisdom of our ancestors. People put far too much stock in being more advanced and supposedly more intelligent, like every petulant little child that ignores the wisdom of their parents. It takes a very strained awakening to finally knock some sense into such stubborn humans, and one can argue that most people remain insensible even after meeting a troll.

Between the monster’s collision with humanity, and humanity’s defiance of the beast and everything it represents, and humanity’s own struggle with itself, and Nora’s personal journey wherein she rapidly experiences great joy, sorrow, horror, and hope all in turn, well, the movie is never dull, and it leaves an impact. It even goes down easier with a dose of humor, mostly involving a particular aide to the Prime Minister who aspires to be a writer and makes Star Trek references. (“Make it so,” he suddenly says in English!) All of this, combined with moving, beautiful music, grand cinematography, appreciable special effects that are appealing to the eye, and some fine acting, make Troll a genuinely good movie.

There are a couple of plot holes, of course, not least being exactly how stubbornly everyone tries to discount stories from the past, no matter when they’re proven to have some basis in reality. Some things are clearly a bit of a stretch, including how most of Oslo gets evacuated prior to an attempt at hitting the troll with a really big bomb that they do not refer to by name, and yet the Royal Palace, exactly where the troll ends up going, still has its ceremonial guard and the chief of its staff there, exactly when and where they are needed to be for the sake of the plot. And, of course, if modern weaponry is ineffective against trolls, it remains unexplained how a group of humans managed to kill all the rest of the trolls centuries ago.

Eh, there are plot holes in even the best of movies, right? It doesn’t really diminish how enjoyable it is.

On which note, I have to admit to a certain personal appreciation of this movie. As a descendant of various northern barbarians, not least including the Norsemen, and as one who grew up reading the stories of gods, giants, dwarves, fairies, and trolls, I really enjoyed this film. It reaches into the tales told by my ancestors and brings them freshly to life. Sure, I enjoy tales of pirates and samurai and robots and kaiju, but there is just something personally exhilarating to see something of my own people on the screen.

I really liked this movie, Troll.

This entry was posted in Movies, Tuesday Review and tagged Troll. Bookmark the permalink.

2 Responses to I Really Liked Troll